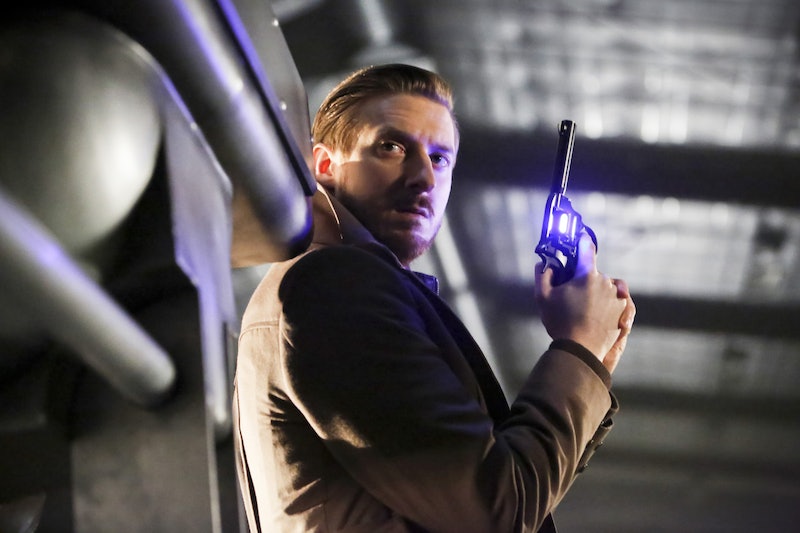 Rarely is a character gone forever in the CW's collection of DC series. The midseason finale of DC's Legends Of Tomorrow ends with a tease of one long-awaited return. Rip Hunter (Arthur Darvill) recruits the Legends in the pilot and spends the rest of Season 1 teaching them the rules of exacting justice via time travel. So his absence during the first half of Season 2 is conspicuous; I never stopped wondering where in time and space Rip Hunter might be. Finally, the captain of the Waverider has reappeared on the show, though this may not be the sarcastic, swashbuckling Rip you remember. Legends Of Tomorrow returns to TV Jan. 24, but is Rip Hunter back for real?

It bodes well for Rip continuing on in Legends that Darvill was written out of the first half of the second season out of necessity. The actor told Digital Spy that he requested to have the time to shoot the third and final season of Broadchurch, a British murder mystery that he's been a part of since the show began. "They were very kind on Legends," Darvill said. "Broadchurch is something that's been going on for a while, so they had to work around that." Fortunately, the Waverider isn't a one-man ship, and Legends isn't lacking for characters. And by removing Rip from the action for a while, the show gets to wring some story out of bringing him back.

In "The Chicago Way," viewers are left with a quick peek at how Rip has been spending his time since they last saw him. It's a scene that demands explanation, which ought to be forthcoming. Because Rip doesn't appear to be a prisoner or anyone or stuck in a never-ending time loop or something like that. Instead, he's a film director circa 1967. He's giving instructions to an actor playing a character who carries his name and doesn't appear to be British anymore. It's one of the show's stranger cliffhangers.

Rip appears in the promo clip for Tuesday's episode, "Raiders Of The Lost Art," so you won't have to wait much longer to hear more from this version of him. It looks like Rip is going to be captured by the Legion Of Doom, the evil alliance made up of Malcolm Merlyn, Eobard Thawne, Damien Darhk, and (gasp) Leonard Snart. But if his memories of being a Time Master and leading the Legends have been wiped, this hippie filmmaker probably has no idea why he's of interest to these guys. In that case, Rip might be intended as bait for the Waverider crew, so the Legion can get them right where they want them.

Whoever this Rip thinks he is, the character seems to be fully back on the show. As of now, Darvill is credited on IMDB for five upcoming episodes, including the midseason premiere. Maisie Richardson-Sellers plays Vixen on Legends Of Tomorrow and told CinemaBlend that Rip's identity crisis is going to play out as the series moves forward. "He does come back, just not necessarily the Rip that we remember," Richardson-Sellers said. "That's sort of what is a big part of the second half of the season."

All of this boils down to both good and bad news for fans of the Waverider's original captain. Rip seems to be back to stay on Legends Of Tomorrow, but the former Time Master has undergone a bit of a personality transplant. Will he ever be the same? As Martin Stein has found out this season, memories can be rewritten.