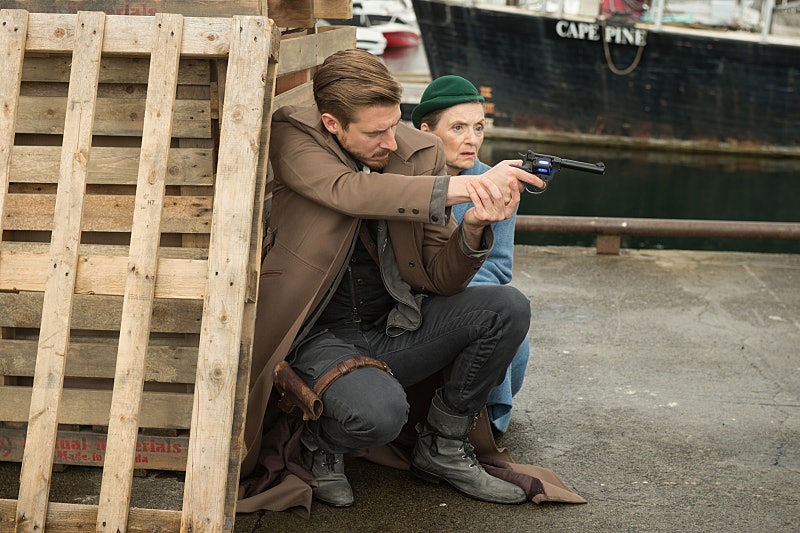 The show many only have one season under its belt, but that didn't stop the Legends of Tomorrow Season 2 premiere from putting its fans through a rollercoaster ride of emotion. Not only were the stakes higher than ever as our group of heroes did everything they could to save New York City from total annihilation, but we also potential lost a vital member of the team. After locking the Waverider in on the A-bomb's coordinates, Rip Hunter scattered the rest of the crew (aside from Mick) throughout different parts of history to help ensure their safety. But he himself appeared intent on going down with the ship. But is that really how it all played out? Did Rip Hunter die on Legends of Tomorrow or is his puzzling disappearance simply just a red herring?

The cause for concern came when Gideon offered to show the team Rip's "final message" to them shortly after reuniting. Because other than this, she has no idea where he is, when he is, or perhaps even if he is anything anymore. And after she played his little speech, it became clear that they're going to have to be on their own for a while without their tough Captain at the helm. The only question is, will it be on a temporary or permanent basis?

A big part of me believes that Rip is still out there. For one, Arthur Darvill is a core member of the cast, so I'd like to think he'll pop up in more than just trips to the past. And secondly, his body wasn't found inside the ship. Mick Rory was able to survive the blast while still on the Waverider after all. And even if Rip didn't prove to be as lucky, then Oliver and Nate Heywood would've found what was left of him. But they didn't. It's almost like he just vanished out of thin air. So maybe, just maybe, he used this opportunity to retire and place himself in a point in time that would make it difficult for him to be found.

Listen, this theory may be a stretch, but it's certainly better than the alternative. Let's just hope this isn't the last we end up seeing of him.