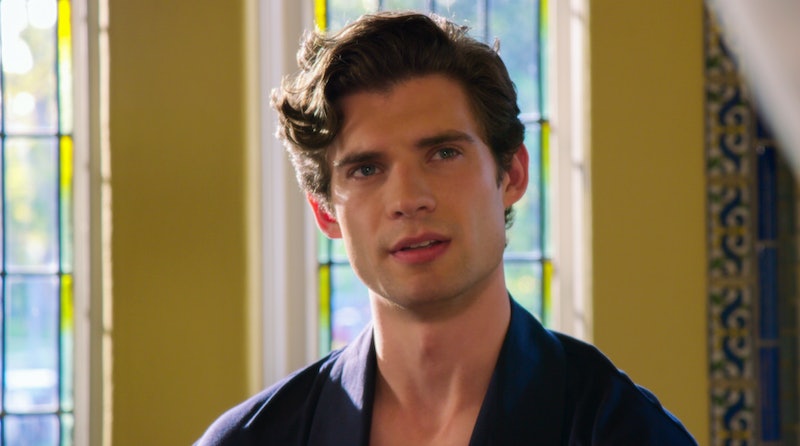 Spoilers ahead for The Politician Season 2, Episode 1. Despite dying in the very first episode of The Politician, David Corenswet's character, River, had a large presence throughout Season 1, acting as a physical representation of Payton's (Ben Platt) conscience. In Season 2, River is still around, but he pops up much more sparingly.

River first appears at the end of Season 2's first episode, while Payton is in a record store struggling to decide if he should run a clean campaign for state senate or use the dirt he has on his competitor, Dede Standish (Judith Light). River is in the store with him, and tells Payton to stop looking at the world in such binary terms, because things are more complicated than just "right and wrong" or "good and bad." Payton mentions that River's line of thinking doesn't really sound like him. That's when River points out the obvious: "I'm not me. I'm the little voice in your head that helps you be you, and that true you changes over time. As you get older, the world gets more complicated. You have to get more complicated too."

River (aka the voice in Payton's head) helps Payton to see that he should do everything in his power to win the race so that he can help more people in the long run. It's probably not what the real River, who was desperate for everyone around him to be more authentic, would have advised. But it's what Payton's version of River advised.

River continues to appear occasionally throughout the season, but not as much as in Season 1. Still, having any role in Season 2 likely came as a surprise to Corenswet. According to Entertainment Weekly, his part wasn't supposed to continue after River died, but series creator Ryan Murphy liked Corenswet so much that he cast him as a series regular. After Season 1, Corenswet told Refinery29 that he was certain that was the end of his role on the show.

"I was heartbroken at the end of the first season of The Politician because I thought for sure there was no way they were going to be able to bring me back for season 2," Corenswet said. "I went back to New York by myself feeling like, 'Ah, well that was just the best thing that could have ever happened. And that will be it for me.'"

But of course, the always-overthinking Payton still needs advice — even if it's technically coming from his own head.

More like this
6 Shows Like Stranger Things To Get Over Your Emotional Season 4 Hangover
By Kadin Burnett
Every Song In The Umbrella Academy Season 3
By Kadin Burnett
Does Umbrella Academy Season 3 Have A Post-Credits Scene? The Answer Will Surprise Fans
By Brad Witter
An 'Emily In Paris' Fave Is Joining Season 5 Of 'The Crown'
By Bustle Editors
Get Even More From Bustle — Sign Up For The Newsletter