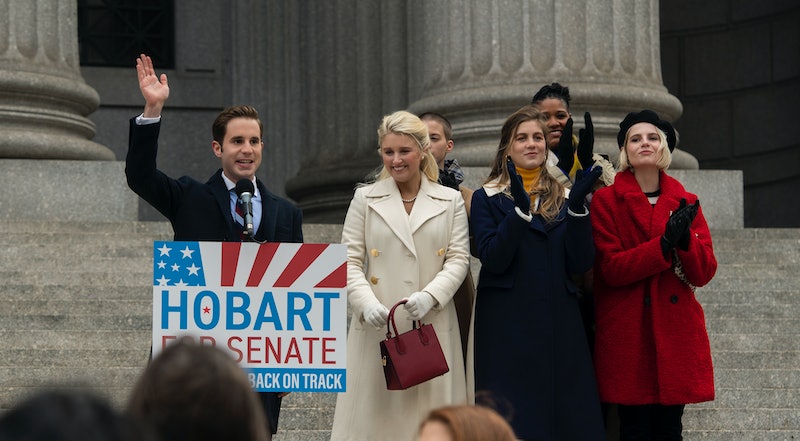 Though the show only premiered Sept. 27, there are already a few details about The Politician Season 2 — most of which came from the show itself. With the advantage of a two-season straight-to-series order, The Politician's writers were able to use the Season 1 finale to set up Payton's next race: instead of gunning to be Saint Sebastian's class president, he's decided to position himself as a young, eager new candidate and run for New York senate against the much more experienced Dede Standish (Judith Light). Payton and his campaign team see her as vulnerable because she's grown complacent after being re-elected for years unopposed — and because they plan to exploit the fact that she's in a secret throuple with her husband and another man.

This was the plan from the beginning: when Netflix picked up the show back in February 2018, it was revealed that each season would focus on a different political race Payton was involved in. As for how his play for senate will shake out, The Politician cast hasn't revealed much. "All I know is that it will be very much focused on mine and Judith's race and that we'll be in New York now," Ben Platt, who stars as Payton and also serves as an executive producer, told The Hollywood Reporter.

Here's what else we know.

Jessica Lange and Gwyneth Paltrow lent major star power to Season 1, but in Season 2, Judith Light and Bette Midler will take up the torch. "It's Ben vs. Judith Light and Bette Midler!" series creator Ryan Murphy told E! News. "The stakes are high because it's for a New York race … I really, really love it because it's about a lot of things, but it's just pure fun. To see those three in a scene will be great."

Light, for her part, told the Los Angeles Times she couldn't wait to take on her "sweetheart Ben."

Don't expect to see Infinity's grandma Dusty in Season 2 — or maybe ever again in the series. When Entertainment Weekly asked Lange if her Politician character would return, she replied, "I don't think so. I mean, Dusty's not one of those that has a second act." However, since Paltrow is an executive producer and her husband Brad Falchuk co-created the show, there's hope that Payton's mom Georgina will show up in New York. (Season 1 took place in California.)

The Show Will Continue To Examine The Political Climate

Much like in Season 1, real-life politics will have a big influence on Season 2, which will explore "this idea of age and experience and the status quo versus youth and the energy of a more progressive, younger candidate," Murphy said in the same Los Angeles Times piece. He added that this "generational clash" is reflected in people like New York Representative Alexandria Ocasio-Cortez, who became the youngest woman ever elected to Congress in 2018.

The Schedule Is Set

During the Watch What Happens Live after show, Light told Andy Cohen that The Politician Season 2 will begin filming in New York City in mid-October — just weeks after the first season dropped on Netflix. As for when fans will be able to see it, Murphy told the L.A. Times that it will premiere on Netflix in summer 2020, ahead of the 2020 presidential election.

Until then, stay tuned for more details assuredly to come.