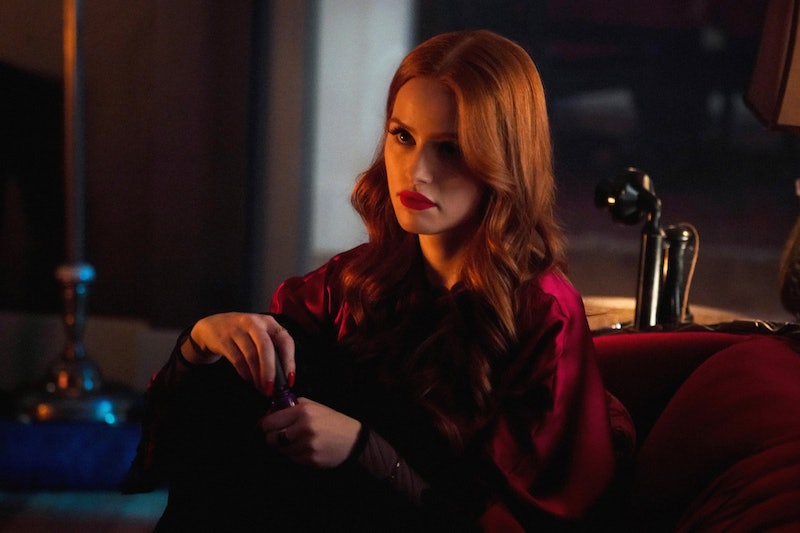 Sadly, fans will have to wait another week for more of Archie, Jughead, Betty, and Veronica's shenanigans because Riverdale isn't new on Feb. 20. Instead of airing the next episode, The CW is running a repeat from December. According to TV Guide, Season 3, Episode 7 "The Man In Black" is playing in Riverdale's usual spot. So, you could always re-watch to see if there are any clues you missed, but if you're more interested in looking ahead, there are a lot of clues about the next episode that are worth diving into.

The next new episode of Riverdale will air Feb. 27. It's called "Requiem for a Welterweight." In the real world, a requiem is usually defined as a church service for the dead, or the musical part of such a service or event honoring the dead. And a welterweight is a weight class of boxing between lightweight and middleweight. Yes, my friends, this means Archie (who recently installed a punching bag in his bedroom) will be boxing some more.

According to Futon Critic, the synopsis for the new episode is as follows:

"As Veronica attempts to steer Hiram away from the drug business, Gladys' return to Riverdale throws a wrench into her plan. Betty grows concerned when Alice decides to take her commitment with The Farm to the next level. Elsewhere, Archie's rush to get into the boxing ring lands him in hot water, while Cheryl's attempt to send the serpents a message causes tension between her and Toni."

So, there's a lot going on here. Obviously Archie's storyline is the welterweight of the title, but what about the requiem? Do we have to worry about Archie facing death again? Perhaps it relates to whatever Betty's mom is doing next with The Farm. Also Cheryl and Toni are going to have a fight? Because NO. NOT ALLOWED.

The synopsis isn't the only place Riverdale fans can turn for information about the upcoming episode. The episodic photos also offer a few clues.

It looks like she may be watching Archie's fight, and the tense look on her face hints that Jarchie is still a floating 'ship.

Betty's Mom Is Having Some Sort Of Baptism

She's fully committing herself to the Farm.

Polly May Be Getting Baptized As Well?

In any case, the look on Evelyn's face is concerning.

Toni & Cheryl Have It Out

It's unclear what the argument is about, but it may not end well because...

Cheryl Is Left All Alone

The tears shining in her eyes are concerning. Did she and Toni just break up?

The answers to all these questions will hopefully come during the Feb. 27 episode. And after that, the show should return to its usual once a week schedule. But if this hiatus made you nervous for a future without Riverdale, never fear. The show was picked up for a fourth season at the end of January, so it's not going away for good any time soon. It just is taking a quick little break before resuming with its usual chaos.

More like this
Does 'Locke & Key’s Ending Mean There Could Be A Season 4?
By Sophia Moore
'The Sandman’s Ending Is A Departure From Neil Gaiman’s Comic Book Series
By Kadin Burnett
Everything To Know About 'RHOC' Season 17
By Brad Witter and Sophia Moore
'Paper Girls' Season 2 Could Introduce Even More New Characters & Threats
By Brad Witter
Get Even More From Bustle — Sign Up For The Newsletter