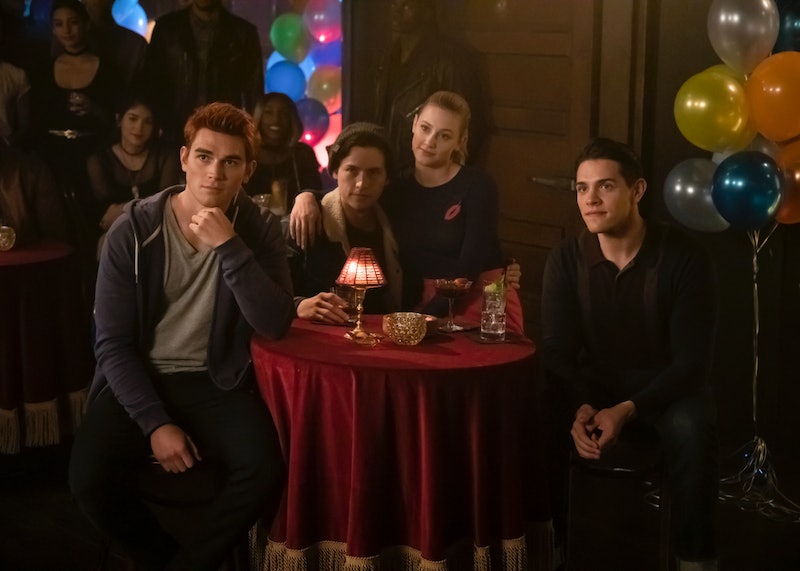 Say what you will about Riverdale's wild storylines and random musical numbers, but The CW series is highly addictive and continues to keep viewers coming back for more. So when we, as fans, fail to get our weekly dose of the town with pep, you better believe it doesn't go unnoticed. So why isn't Riverdale on tonight? The Feb. 13 episode is a rerun, and while rewatching previous episodes is just fine, it pales in comparison to seeing new drama unfold. Unfortunately, this won't be the only week you'll find yourself in a similar situation.

According to a recent promo that was unveiled after last week's episode, the series won't be back until Wednesday, Feb. 27. That means we're forced to go three whole weeks without any new Riverdale content. (And here we all thought the Gargoyle King was cruel.)

The cause for this interruption is unclear. After all, it's not like there's an awards show or State of the Union or even a sports game that's interfering with the show's schedule. So it seems this is simply a small hiatus that happens on occasion to help break up the episodes and allow the series to extend long enough to make it to May finales.

Sure, it's not an ideal scenario to be faced with, but considering we only have two Wednesdays left until its return, the wait isn't totally unbearable. Plus, as a bonus perk, the network is still airing old episodes in its place, allowing you to go back to earlier in the season and revisit some of the plot points.

This Wednesday's rerun, for example, is the fourth episode from Season 3, titled "The Midnight Club." So yes, that means you have the chance to see that pitch-perfect flashback episode all over again. But for those who need a bit of a refresher regarding what the episode is about, the official description reads as follows:

"When Betty confronts Alice about Gryphons and Gargoyles, Alice has no choice but to come clean about how she, along with a young Fred, FP, Hermione, Hiram, Sierra, Penelope, and Tom played the game in the early '90s — and how a shocking mystery has been plaguing them all ever since."

It's not the same as watching a brand new episode, but if we're being totally honest, it's the next best thing. That flashback is hands down one of the biggest highlights of the season thus far, so being forced to see it again isn't too much of an imposition. The following week, Feb. 20, will follow a similar pattern, only this time it will air Episode 7 of the third season, titled "The Man in Black," which involved Archie and Jughead on the run, as well as the introduction of Laurie Lake.

Knowing that Chad Michael Murray will be making an appearance in the near future as Farm leader Edgar Evernever makes the delay all the more frustrating, regardless of how brief it may be. Let's just hope these next few weeks will fly by so we can get back to fully immersing ourselves in all the Riverdale drama we can handle.