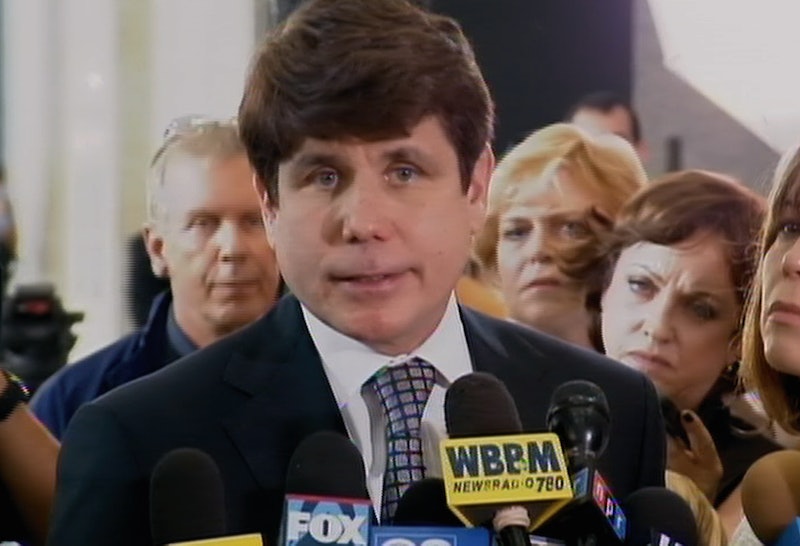 Netflix's new docuseries Trial by Media examines some of the most highly publicized criminal trials in recent history. Among them is the case of former Illinois governor Rod Blagojevich, who went on a full press tour after being charged with fraud in an attempt to prove his innocence. It didn't work: Blagojevich was sentenced to 14 years in prison in 2011. But thanks to President Trump, he only ended up serving about half of that time.

As reported by the Chicago Tribune, Blagojevich was arrested in 2008 on multiple counts of fraud, including trying to sell the vacant Senate seat left by then president-elect Barack Obama and attempting to bribe children's hospital executives and horse-racing industry members. Afterward, he was impeached from his role as Illinois governor. That's when he began a media tour in order to try and clear his name. This included a stint on Donald Trump's reality show The Celebrity Apprentice in 2010, per the Journal Star. However, Blagojevich was eliminated from the show after failing to do enough research for a presentation on Harry Potter; his group misstated key places and names from the book series, including calling Hogwarts "Hogwards," Slytherin "Slithering," and Ravenclaw "Ravencloth."

In late 2011, Blagojevich was found guilty on 18 counts of corruption, according to the New York Times. He was meant to serve a minimum of 12 years minimum before he could be considered for parole, but in 2018, Trump — now president and not just a reality TV host — began talking about commuting Blagojevich's sentence, which would release him from prison but not pardon him for the crimes.

In February 2020, Trump followed through and commuted Blagojevich's sentence four years early, per ABC News. "He served eight years in jail, that's a long time," Trump said, admitting that he'd seen some of Blagojevich's wife's media appearances arguing for her husband to be released. "I don't know him very well, I met him a couple of times, he was on for a short time on The Apprentice years ago, seemed like a very nice person. He'll be able to go home to his family after serving eight years in jail — that was a tremendously powerful, ridiculous sentence in my opinion."

Blagojevich has only been home for a few months, but the lifelong Democrat has already been singing Trump's praises. "What he did was I think something that deserves a great amount of appreciation on my part personally, and he has from me my deepest, most profound and everlasting gratitude," Blagojevich said, according to the Chicago Tribune. What's next for the disgraced governor is uncertain, but Trial by Media seems to suggest he could run for office again. And amid the current political landscape, nothing feels outside the realm of possibility.