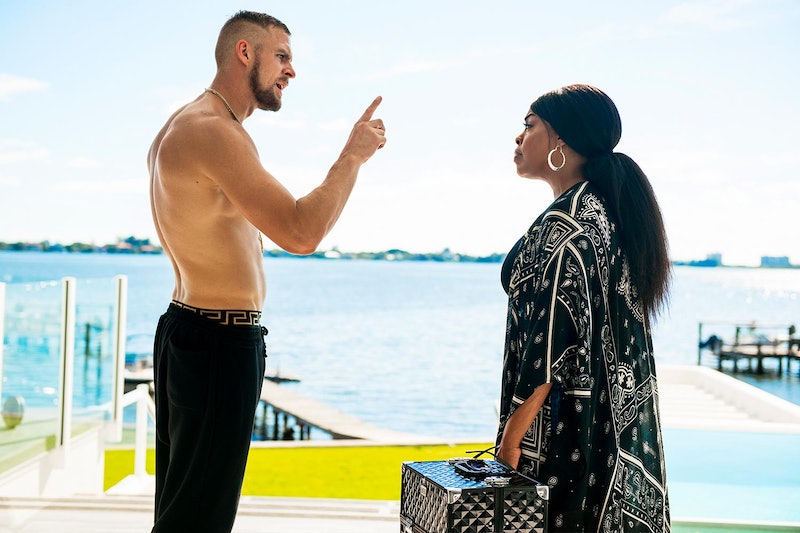 Firstly, I want to say that I completely understand Desna’s point of view on Claws. She did all this work with and for Roller, her boyfriend. And, even though he treats her terribly, the heart wants what the heart wants. Too bad that, in the June 11 premiere, when Desna doesn't get the bonus she was promised for laundering his monty, that Roller refuses to back her up and even pulls the whole “you work for me” thing. It’s no wonder Desna bashes him over the head and tries to drown him in his pool. But is Roller really dead on Claws?

Let me back up a little bit — Roller doesn't meet his alleged mortal maker because of the pool. Desna thinks that Roller is done for, and while she's letting her adrenaline come down, Roller leaps out of the pool and begins punching her. He probably would have killed her, had Virginia not been there to shoot Roller, making him fall back into the pool. Normally, Desna wouldn’t accept anything from her, since Virginia snitched on Desna and was also sleeping with Roller behind her boss's back. But Virginia gets there just in the nick of time to keep Desna from floating away from the dock of Roller’s new drug-money mansion. Yikes. Things are complicated already, and viewers don't even know if Roller is really dead yet!

This can play out in two possible ways — the first is that Roller is dead, and the women, who are a tight-knit crew, have to cover it up and take over his role in the money-laundering scheme they have going on. That will lead to all sorts of problems, right? The second is that Roller can live, but be wounded enough to be hospitalized, and the women will be all kinds of scared that he’ll wake up and turn them in. I personally think that the former is more likely, but who knows?

According to IMDB, Jack Kesy, who plays Roller, is set to appear in all 10 episodes Claws Season 1. So either that’s a red herring, there are flashbacks, or Roller is not dead. And he’s probably going to be really angry when he wakes up.