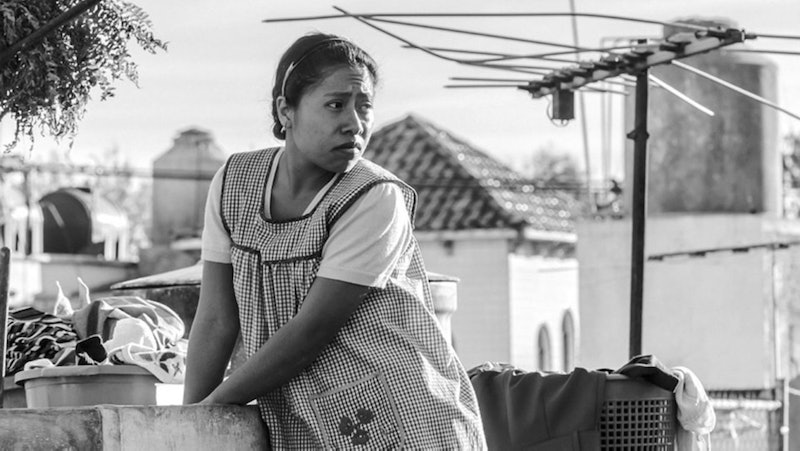 Alfonso Cuarón's latest film Roma, which comes out on Netflix and in select theaters on Dec. 14, is a look back at Mexico on the cusp of change, through a particular lens. Following a family undergoing as many upheavals as the country around them, the film is clearly rooted in subjects close to Cuarón's heart. But is Roma based on a true story? If not directly, it's still the most personal a film could ever be.

Speaking to IndieWire, Cuarón admitted that "the characters, they exist in real life. It’s people that I love deeply. I had to take a journey through my own memories, through the labyrinth of memory, and also conversations with the people who were there and who experienced those events with me,” clarifying that the film was pulled from his own childhood. "Sometimes directly, sometimes a bit more obliquely. It’s about a moment of time that shaped me, but also a moment of time that shaped a country. It was the beginning of a long transition in Mexico," he continued.

In an interview with Vanity Fair, the director was also very clear about the deep personal nature of the project, explaining that the film is autobiographical "in the sense that 90 percent of the scenes come out of my memory." The film was shot using furniture from his family home, in locations where real-life events actually happened. All of this, he says, was to follow the story of a woman named Cleo, (Yalitza Aparicio in the film). "She was the domestic worker in my home, the nanny, that we end up becoming part of her family, or she becoming part of our family. The other character is based upon my mother. But we follow pretty much the point of view of Cleo," he explained.

It might seem egotistical at first for a male director to assume he could or should tell the story of the women in his life. But Cuarón realizes both the difficulty and importance of recognizing these women as people in their own right outside of who he knew them as, with their own interiority and issues. The empathy he brings to their story with Roma, especially Cleo's, speaks volumes — it's clear Cuarón tries to get out of his own way to let their lives unfold without dishonesty or burnishing history, and with the added weight of coming back and watching his own past.

Talking to Variety he explained, "I was a white, middle-class, Mexican kid living in this bubble. I didn’t have an awareness...You have a very utilitarian relationship with your loved ones. You’re afraid to stop and see their weaknesses. But it started to be clear [Cleo] had another life.”

The film is dedicated to Cleo's real-life counterpart: Liboria “Libo” Rodríguez, a now-74 year old Mixtec woman from the small town of Tepelmeme who joined Cuarón's family when he was just nine months old. Rodríguez and Cuarón are still close, though she says she never imagined he would make a film of her life, per the same Variety piece.

First-time actor Aparicio, who plays Cleo in the film, was a small-town schoolteacher who had just finished classroom training a month before being cast in the film. In a separate Variety piece, she claimed she was initially shocked. "I’m very camera-shy and also the quietest member of the family. And so they were like, 'What are you going to do when the camera starts rolling? Are you going hide?'" she recalled. But working with Cuarón and overcoming her wariness, she came to a better understanding of what she was achieving with acting. "I’ve now realized I like both things. I’ve realized that acting in films is another way of teaching — just at a mass scale to reach a larger audience," she said.

More like this
Meghan Markle Wishes Learning Royal Protocol Was Like 'The Princess Diaries'
By Jake Viswanath
Yes, That's Lindsay Lohan's Sister Singing In The 'Falling For Christmas' Movie
By Radhika Menon
How To Stream 'White Noise' On Netflix
By Grace Wehniainen
The 'Lady Chatterley's Lover' Book Leaves Us With A Troubling Question
By Catharina Cheung
Get Even More From Bustle — Sign Up For The Newsletter