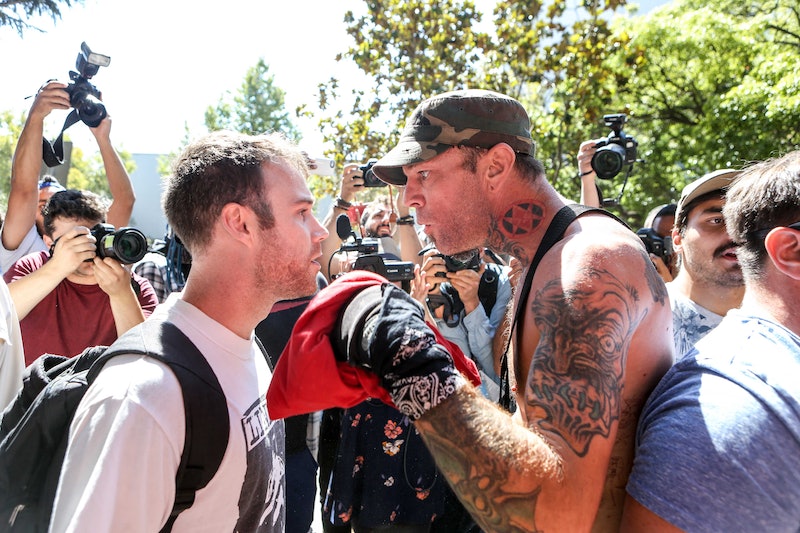 In Portland on Sunday, planned protests descended into chaos and violence, as alt-right demonstrators and counter protesters clashed on the streets of the liberal city. There was even another incident of a car being utilized as a weapon, when a man was arrested for reportedly trying to run over counter protesters. As these attacks and violent rallies become a more frequent occurrence in the weeks after Charlottesville, it begs the question, is this a new protest trend? Did Charlottesville open the flood gates to inspire, and even normalize these violent ideological clashes?

On Sunday, the far-right group Patriot Prayer had planned a rally for the Oregon city titled “Peaceful Portland Freedom March.” The group insists that it does not support white supremacist ideals, but its rallies have drawn droves of alt-right and white supremacists attendees. They are often instigative and have recently descended into violence, like the rally in Berkeley last month that led to clashes between so many different factions, it was hard to keep track which "side" people were on.

At the last minute, the Patriot Prayer rally was moved to Vancouver, Washington, on the other side of the Columbia River from Portland. Counter protesters marched through downtown Vancouver to meet the crowds, but were soon blocked by a pick-up truck, reportedly sporting two large American flags and a Confederate flag decal. The counter protesters behind the truck, which some identified as Antifa members, reportedly began throwing rocks and water bottles at the truck. In response, the driver threw the truck in reverse and came speeding down the street. He reportedly did not hit anyone, but narrowly missed several people, even causing some to jump out of his way. When he again drove his car across the crowd, blocking the path of the march, police arrested the man, but he was reportedly later released and not charged.

It's hard not to compare this situation in Portland to the incident in Charlottesville last month, where a man drove his car into a crowd of counter protesters, hitting 20 people and killing Heather Heyer. The protests in the Virginia city over the removal of Confederate statues captured the focus of the nation for days, if not weeks. It drew out crowds of alt-right members, white supremacists, KKK members, and neo-Nazi supporters, who then clashed with counter protesters rallying against the hate groups. Since then, similar confrontations have been happening all over the country. From coast to coast, alt-right and white supremacist groups have been scheduling rallies, and counter protesters have met them at every turn, usually outnumbering them, to show that their ideologies are not accepted in this country.

It's not a stretch to say that this incident could have been a copy cat attack. Seeing the death and injury caused by the Charlottesville car attack could lead others to view this as an efficient means of destruction. It also was a flash point of the events in Virginia. So when the alt-right continues to be outnumbered at their own rallies, doing something drastic like driving a car into a crowd might be seen as the only "success" for their side.

It's also worth mentioning that these actions are not condemned in the same manner as they are when perpetrated by non-white, non-Christian men. Plowing cars into crowds has become a frequent terrorism tactic of ISIS, and the president is quick to condemn these attacks as acts of terrorism, even before much information is known about them. However, when the same thing happens in the United States, the response from President Trump is less fervent and determined, perhaps because there was a white male in the driver's seat. But again, that is simply a speculation.

It's possible that these previous incidents have emboldened others to act in a similar way, especially because the president wasn't quick to strongly condemn hate and bigotry. And if this is a new trend in the alt-right's arsenal, it's scary to think where protests in America are headed.