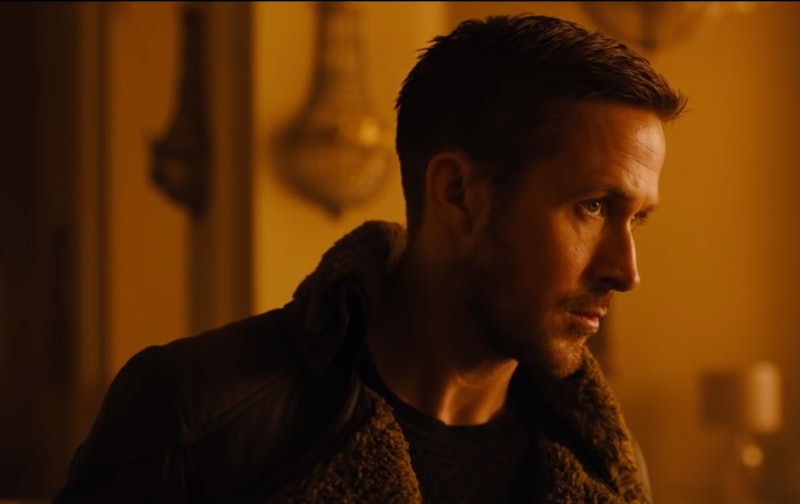 Blade Runner 2049 is one of the most exciting movies of the year, and fans of the original Blade Runner are dying to know how it will be similar or different to the first film, considering the new movie is a sequel made 35 years after the original. For those unfamiliar, the general plot of Blade Runner involves futuristic special police officers called — you guessed it — blade runners, who tracks down cyborgs known as Replicants. Harrison Ford's Rick Deckard is a Blade Runner, but whether K, played by Ryan Gosling, is a replicant or Blade Runner in 2049 is a mystery the filmmakers have kept secret from hungry fans.

Spoilers ahead! Gosling's identity in the new movie, which has its theatrical release Oct. 6, is actually revealed at the beginning of the film, when it's said that K is a replicant. It's also seemingly made apparent by the Blade Runner 2049 teaser trailer, which shows Ford pointing a gun at Gosling, suggesting that the two are opponents in the new film. If you're concerned that this gives the whole plot of 2049 away though, don't worry, because the film has a lot more depth to it than simply good vs. bad or human vs. android. In fact, this type of ambiguity is what makes both Blade Runner installments so compelling.

The original Blade Runner left the question of Rick Deckard's identity open to interpretation, and according to The Telegraph, even Blade Runner's creators aren't certain if Deckard is a human or android. Ridley Scott, the director of Blade Runner, says that Deckard is an android, while Ford, who plays Deckard, believes him to be human. While the new installment clearly identifies Gosling as a Replicant, the film still presents the question of how much humanity still exists within him, and he grapples with his identity often throughout the film. Gosling spoke about this conundrum of the 1982 film to Buzzfeed, saying, "It's such an amazing use of what you think the audience's understanding is of you, or their expectation of you. And then using that and subverting that expectation to the benefit of the story and the film. It felt very challenging. It was exciting."

While Ford and Scott have clear opinions about whether or not Deckard is actually a full human, the screenwriter of both Blade Runner films, Hampton Fancher, hasn't stated an opinion and instead leaves fans guessing. It's almost emblematic of the series to want to keep audiences guessing, and even in reviews, critics are cautious not to reveal too much and ruin the surprise for Blade Runner 2049 viewers.

Confirming who is and isn't a human would go against the long-standing tradition held by the series to keep many things either secret until the film's release. Even though audiences may guess before going in that Ryan Gosling's character is in fact a Replicant, there will likely be plenty of major surprises and mysteries that arise throughout the film. In a way, going into Blade Runner 2049 isn't very different from the experience that was watching Blade Runner back in 1982. Since very little is known about the intricacies of each character's identity, not to mention the overall plot itself, audiences are getting the opportunity to go see the movie knowing very little besides the fact that Harrison Ford, Ryan Gosling, and Jared Leto star in it — oh, and that it looks really, really cool.

Considering that the plot of the new film picks up right where Blade Runner left off, fans of the franchise can hypothesize about what happens, but the fun of the mystery is that they will never know until they're actually seeing it in theaters.

More like this
You Can Finally Stream 'Ticket To Paradise' At Home
By Chloe Foussianes
Jodie Turner-Smith & Joshua Jackson's Relationship Timeline Includes Her Proposing
By Jake Viswanath
J.Lo Wants To Make A Sequel To This Movie With Ben Affleck
By Jake Viswanath
This James Bond Event At Abbey Road Studios Was A 007 Fan's Dream
By Samantha Rollins
Get Even More From Bustle — Sign Up For The Newsletter