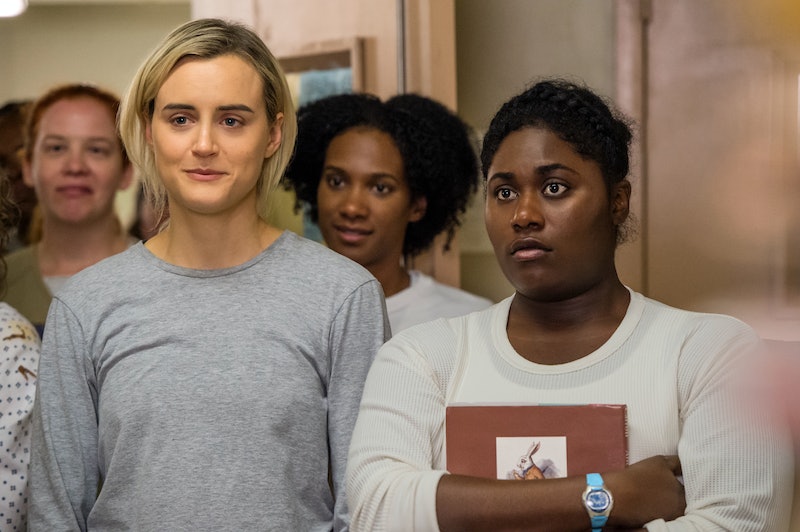 If you've reached the end of Orange is the New Black, and be warned because there are spoilers for Season 5 ahead, you may be wondering how the heck the show is going to go on after this. Was that secretly a series finale? With many of the show's long time heroes making a united front, it feels like an appropriate ending. According to Entertainment Weekly, however, that won't come for a long time. Orange is the New Black was renewed for Season 6 and 7 back in 2016.

Based on how things ended up at Litchfield, that certainly makes the future interesting. The characters are split into multiple factions. The prison is being vacated and permanently damaged. However, many ensemble serials ultimately find a way to separate the characters. Think Lost, The Walking Dead, or even The West Wing. Up until this point on Orange is the New Black, that has been difficult due to the basic logistics of the story. Though reuniting with their fellow inmates isn't necessarily the goal for most of these women, I can't wait to see if and how they ultimately come together again.

At the end of Season 5 most of the prisoners have been rounded up, arrested, and sent off on their way to new facilities. Angie and Leanne, my chaotic least faves, did at least one potential good deed by burning the prison records. (But there have to be digital records, right?) Chang escaped through a hole in the fence, and since Linda from MCC is with the other inmates filling a spot in the headcount, her absence won't be noticed for a while — especially if Caputo has anything to say about it. Tiffany, sometimes known as Pennsatucky, is somewhat safe in the off-campus housing.

Meanwhile, the dream team of Taystee, Cindy, Nicky, Suzanne, Piper, Alex, Red, Gloria, and Frieda blew up the entrance to the pool with a stick of dynamite. Their fate is still somewhat uncertain, not to mention the somewhat botched negotiations, Morello's pregnancy, Gloria's son, Piper and Alex's engagement, and about a dozen other loose ends. Thank goodness there are at least two more seasons of Orange is the New Black coming. While the drama and the chaos seems climactic and that final shot would make for a great ending, this story is far from over.