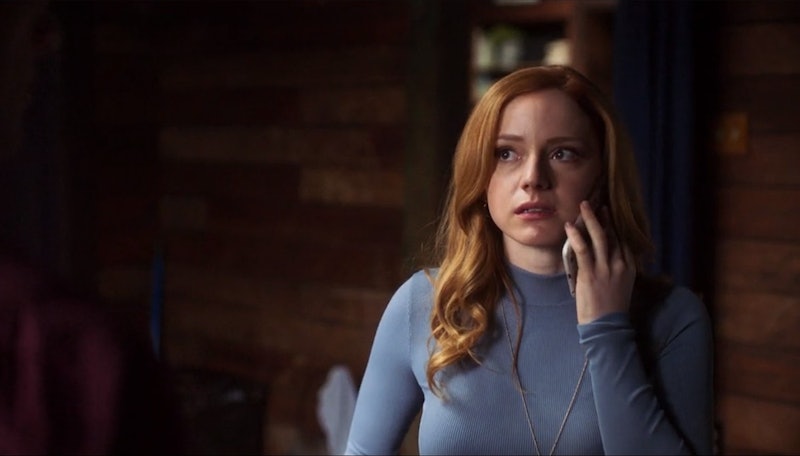 There’s nothing scarier for a mom than her daughter turning into a teenager. The sweet little girl who used to think her mom was a rockstar has suddenly become a moody, defiant person who is starting to go on dates and demand her independence. It's a tough yet familiar topic in families that has been covered in hundreds of films. But, leave it to Lifetime to put a dark spin on this typical issue between moms and daughters. The network's latest movie Seduced By A Killer isn’t based on a true story, but the plot is almost ripped straight from the headlines.

Per Lifetime, Clare Kramer stars as Jessica, a single mom who isn’t happy about her daughter Tessa dating an older man. Like any normal mom, she does everything in her power to force this man to leave her child alone, but it is to no avail. Jessica quickly realizes the hold that this older man has on her estranged daughter and discovers that he is far more dangerous than she could have imagined. It’s a scary premise that feels all to real, especially with issues like R. Kelly’s alleged sexual misconduct with minors dominating current headlines, but thankfully this particular story is not based on any true events.

Seduced By A Killer’s trailer makes this film even more sickening with a glimpse into Tessa's dangerous situation. Jessica is horrified after following Tessa and discovering her kissing a man who is clearly far from his teenage years- twice Tessa's age, to be exact. She quickly confronts the creep face to face and warns him to stay away from her child, to which he grossly replies that Tessa is a “grown woman” and implies that their relationship is sexual. Yep, he's definitely a mom's worst nightmare.

Things really start to spiral out of control when Jessica discovers he was previously in psychiatric hospital and has a criminal past. She relays this information to Tessa, but it’s too late because they are already caught in his cross-hairs. The end of the clip shows him apparently holding the mom-daughter duo hostage and raging out with a baseball bat. Jessica appears to get the upper hand by kicking and injuring him, but the action abruptly ends to avoid spoilers. Hopefully, this story will have a classic Lifetime ending with him dying or leaving the final fight scene in handcuffs because that's exactly what he deserves.

It makes you wonder what he did to be put into the hospital in the first place and why he targeted Tessa. Has he killed a teen girl's mom before because he wanted her out of the way? Or, was his ultimate plan to lure Tessa away from her family for a sinister purpose? Was he released from the pysch ward or did he find a way to escape? And, how in the world will Jessica save her daughter from this predator? The only way to discover the truth is by tuning in on Jan. 25 at 8 p.m. ET.