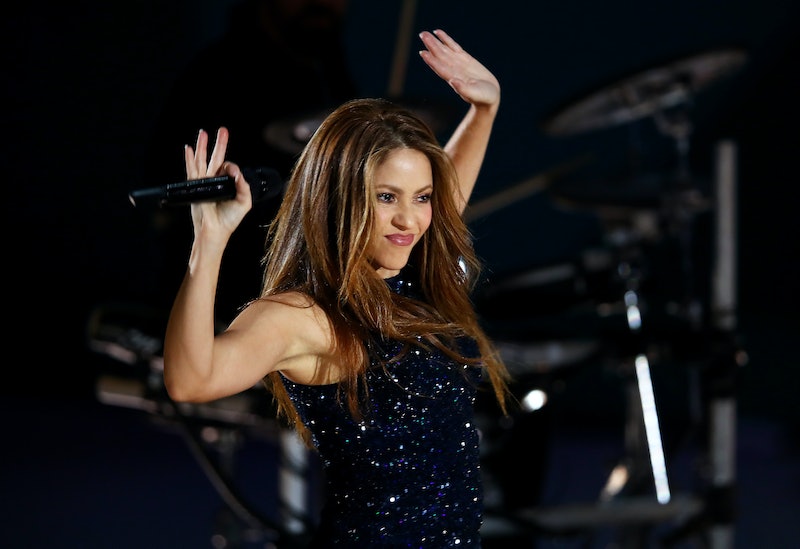 The glittering diamond at the heart of this year's Miami-set Super Bowl LIV is the halftime show featuring dual headliners Jennifer Lopez and international superstar Shakira. Though J.Lo's been out and about promoting her Golden Globe nominated film Hustlers, Shakira's career has been quieter of late, with her last album El Dorado coming out in 2017. But with all the halftime attention one might wonder, is Shakira going on tour in 2020?

Shakira doesn't have any plans to tour at this time, and is focusing all of her energy on the halftime performance. While it's a huge moment for the pop star, it's also a divisive one. Many artists, including Cardi B, turned down the halftime gig following the NFL's treatment of player Colin Kaepernick and the institution's resistance to the "taking a knee" movement. But for Shakira, taking on the job was its own form of protest. "I think it’s the right thing to do for the Latino community because we’ve also been through so much in Trump’s America," she tells the Guardian. "With walls being built... It’s an opportunity to celebrate our culture, you know?” And speaking of unity, there's even rumors famous Miami local and Latinx performer Gloria Estefan might make an appearance alongside J.Lo and Shakira.

Guesses about her halftime set list include a medley of mega hits like "She Wolf" and "Hips Don't Lie." But in a recent 60 Minutes interview, following the singer during her 2019 Davis Cup Finals Madrid performance, Shakira shared a clip of a song she was working on. Forbes went on to describe the song as, "reggaeton-influenced, Spanish-language track featuring a male vocalist." But despite its "in progress" status, fans and followers hope this might be a brand new single ready for debut during the February Super Bowl.

While it's unclear if she'll play new music, one thing is certain: Shakira is excited for the performance. In a YouTube interview, Shakira said of the halftime show, "I can't stop thinking of ideas; every day I have new ideas!"