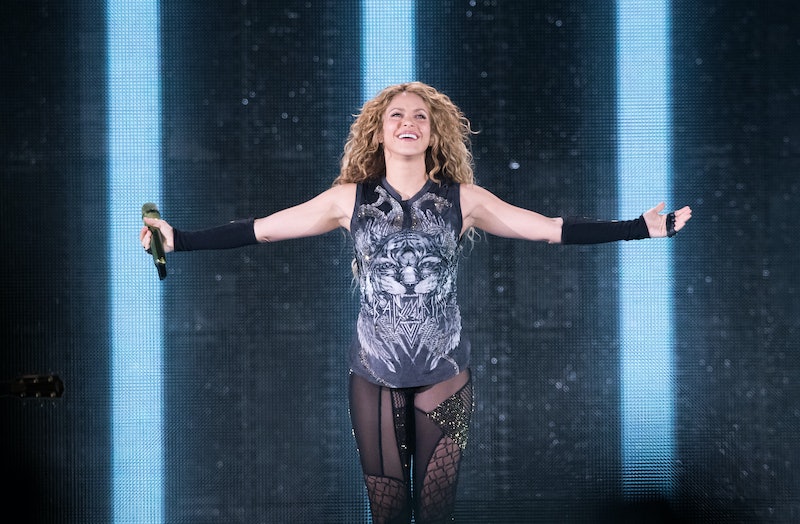 The 2020 Super Bowl halftime show is going to make everyone shake their hips in delight due to its history-making duo performers. Shakira teased her Super Bowl performance in a recent interview, promising that she'll honor the Latinx community in the states and worldwide. And it's all thanks to Shakira's team-up with Jennifer Lopez, which will mark the first time two Latinx entertainers are headlining the Super Bowl halftime show together.

"I've always wanted to perform at the Super Bowl," Shakira told Zane Lowe on Apple Music's Beats 1 on Oct. 15. "It's like the holy grail of the entertainment industry. It's a sports event, but it has huge relevance for us artists, and I think it's going to be fantastic."

Shakira revealed that Jay-Z, who is producing the halftime show, personally reached out to her and asked if she would like to perform with Lopez. Shakira obviously accepted Jay Z's invitation, and is excited that she and Lopez are able to represent their culture in both the United States and others across the globe. "He mentioned that Jennifer was also involved, and I feel that it's going to be great because she also represents a really important part of the Latino community who lives in the U.S., and who has been born and raised in the U.S.," Shakira explained. "And I think in a way, I feel that I'm representing another part of the Latin world, which is all those people around the globe who almost barely speak English."

While Shakira and Lopez aren't the first Latinas to perform at the halftime show, they are the first Latina female headliners since Gloria Estefan became the first Latinx musician to perform the show in 1992. And the fact that two Latin women will be taking the stage together for the first time over 25 years later is meaningful, not just for Shakira, but also for Lopez. As Lopez said in an interview with Shakira that aired during an NFL game on FOX in September, "It's the marker of a new time, not just for the NFL but for this country. It sends an important message."