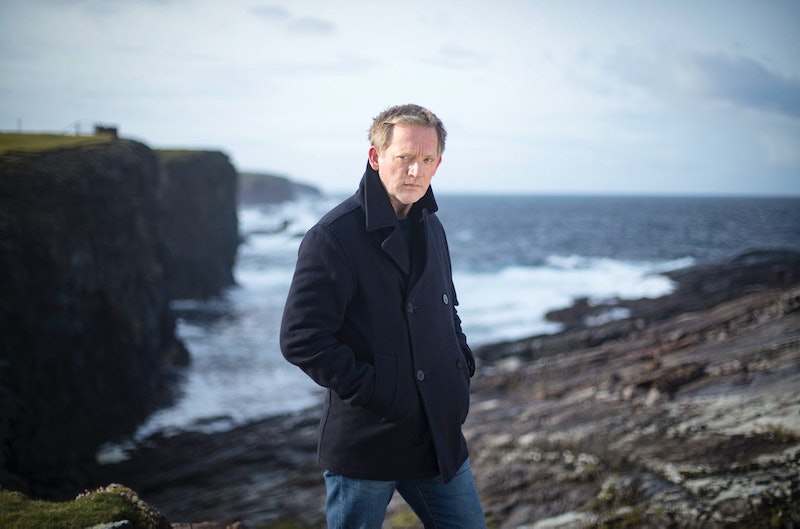 Shetland — the murder mystery show set on the Scottish archipelgo of the same name — is soon to commence its fifth season, and you should start getting real excited about it. For those not yet in the know, the serial drama follows DI Perez as he takes on some of the Isles' grizzliest crimes, and it's picked up quite a few Scottish BAFTAs during its run. The show is based on the novels of English crime writer Ann Cleeves, but where did she get her inspiration from? Is Shetland based on true stories?

Set to premiere on BBC1 at 9 p.m. on Tuesday, Feb. 12, the fifth season of Shetland will have six episodes in total, according to its official BBC site, but as has happened since series three, it's going to veer away from Cleeves' novels. Speaking to the Express ahead of the season four premiere in March, 2018, writer David Kane confirmed: "Now that we have a longer format for Shetland we can’t use the books as source material."

Instead the writers are opting to loosely "maintain the essence of Ann’s books and characters," while they "create new stories." So, yep, season five's all fiction. No need to get nightmares if you do happen to live on the Shetland Isles, though the first episode might give you them anyway. Series five starts with the body parts of a Nigerian man washing up on a local beach, so Jimmy Perez and Tosh are right in at the deep end.

While Cleeves' novels don't exactly lift from true events, they are inspired by her time spent living in Shetland, as well as her former work as a probation officer. “It is more than 40 years since I first went to Shetland because I got there in 1975," the author told the Daily Record on Jan. 16, 2016. "The Shetland plots couldn’t be set anywhere else because they are intrinsic to what  is going on in Shetland," she added.

Something intriguing about Cleeves' novels is that, as a writer, she treats the murderers with a level of sympathy that stands out to the reader. That comes down to her time working as a probation officer. "It was a great experience because it meant that I got access to lots of people I wouldn’t usually meet and I got into all sorts of different homes and houses," she told the paper. “I’m not interested in writing  about monsters and I met very few monsters when I was working as a probation officer."

"I've always enjoyed traditional detective stories, but Shetland also has the atmosphere and space of Nordic novels," Cleeves told Pan Macmillan on Jan. 31, 2019. That might be why season four of the TV show took a detour to Norway — an environment that made sense next to Shetland. Whether season five will also veer away from the Isle of its namesake is very much left to be seen.

Either way, don't let this show put you off taking a holiday to Shetland or elsewhere. The village-noir drama now only exists in the imagination of its TV writers, but feel free to take a trip to BBC1 at 9 p.m. each Tuesday from February 12 to March 26. Shetland will be waiting for you.