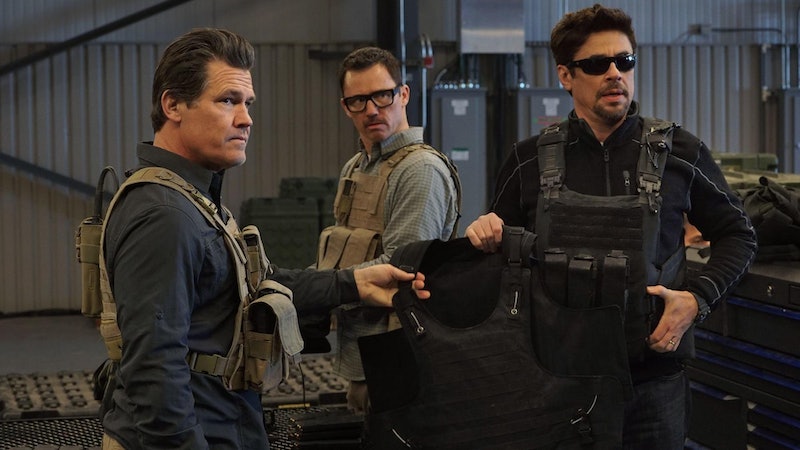 Picking up where its predecessor left off, Sicario 2: Day Of The Soldado once again dives into the violent, ongoing war between Mexican drug cartels and the CIA's equally ruthless involvement in their affairs. This time, in an attempt to turn the cartels against each other, the CIA sets up a "false flag" operation to kidnap the daughter of a high-ranking drug kingpin. But is Sicario 2 based on a true story? Stranger things have happened in the endless War On Drugs, and the CIA has involved itself in far more brutal operations than the kidnapping of a single teen.

For the new movie, Josh Brolin and Benicio Del Toro reprise their roles respectively as CIA Agent Matt Graver and undercover operative Alejandro Gillick. The film opens by touching on the U.S. government's very real and dirty history, past and present: two decades ago, smuggling cocaine across the border was most profitable, while today it's trafficking human cargo, taking advantage of desperate people trying to escape the collateral damage created by the CIA, Mexican, and American governments and escalated over the years.

If it seems beyond the pale that the CIA or other U.S. groups would directly meddle in Mexico's violent drug war for their own ends, you haven't been keeping up with the news. In 2011, the Drug Enforcement Administration (DEA) convinced a high-ranking Zetas cartel member to reveal the location of its two kingpins, a major coup. Unfortunately the DEA shared that information with a Mexican Federal police unit despite knowing the unit had a number of information leaks and moles. As ProPublica reported, their decision led to the slaughter of men, women, and children over months in the suburban town of Allende, just across the U.S. border. More recently in 2014, Business Insider reported that it was confirmed that the U.S. government made direct deals with the Sinaloa drug cartel, getting information on their rival cartels in exchange for U.S. law enforcement looking the other way as Sinaloa shipped millions of dollars worth of drugs across the border.

If thousands of lives, directly and indirectly, don't matter in planning these deals, the idea the CIA would have any qualms about an individual kidnapping, and potential execution as cover-up, seems small potatoes. Soldado's screenwriter Taylor Sheridan agrees, telling Deadline Hollywood that for inspiration, he "didn’t have to dig too deep to find information." Sheridan noted that "all of the violence that you see was based on actual events, taken completely out of context and fictionalized, but bodies on bridges and bodies in walls, I didn’t make that up.”

On the heels of President Trump's foreigner fearmongering and his administration's policy of separating immigrant families from their children, Soldado's events may seem painfully on-point, but as Sheridan told Collider, it's entirely coincidental. “People are gonna think I have a crystal ball—I don’t—but the current political activities are oddly timely to what Soldado confronts,” said the writer. He also pointed out that with the Trump administration doubling down on their policies and the Mexican government taking little action, "unfortunately there is still much to mine in this world and explore creatively."

Speaking with cNet, Sicario 2 star Benicio Del Toro added that "these movies scratch into real things that have been happening for 40 years, maybe longer," echoing Sheridan's opinion that there's likely more awful inspiration to come. Said Del Toro, "Filmmakers and storytellers take from reality ... in this world [of the drug war], just like in a Western or a gangster movie you can explore many aspects of the human condition: greed, vengeance, morality, good versus evil, betrayal." The actor was also careful to note that the recent spate of children separated from their parents in the United States is very different from Soldado's planned CIA kidnapping. "It's a coincidence; let's not confuse them," he said. "They are apples and oranges really."

Plans are already in the works for a third Sicario movie, though currently details are scarce — director Stefano Sollima told The Independent that like Sicario 2 the third film will share characters but be able to stand completely alone. Whatever the plot, odds are high that like Sicario 2, it will still mirror the real world to a disturbing degree.