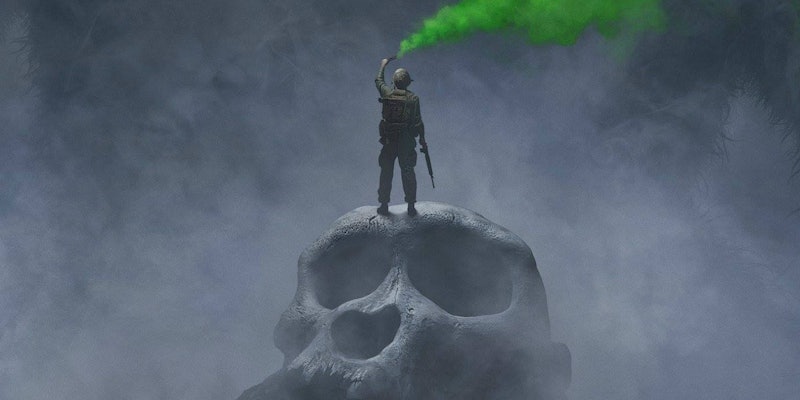 The new movie Kong: Skull Island tells the story of King Kong in a new way. Instead of focusing on the giant ape's trip to New York City, the movie is all about Kong's homeland of Skull Island. But is Skull Island a real place? The island in the South Pacific is home to not only the giant ape, but all sorts of fantastic creatures like skull crawlers, monstrous oxen, and enormous spiders. The creatures are obviously fictional, but what about their homeland? Is there really a Skull Island like in the movie?

There isn't, thankfully. The island, like its inhabitants, is wholly fictional. Kong's island home in the Pacific makes its first appearance, along with Kong himself, in the 1933 film King Kong. There, the island is depicted as having a skull-shaped mountain called "Skull Mountain," but the island itself is never referred to as "Skull Island" on screen. It wasn't until recently that Skull Island became the canon name for King Kong's home, as the island has gone by various names in films over the years, such as "Kong's Island," "Farou Island," and "Mondo Island." But just because this particular Skull Island isn't real doesn't mean there aren't other Skull Islands that are.

In the Solomon Islands, near Lola Island, there is a small island known to the locals as Skull Island. A sacred site, and a tourist destination, the tiny island boasts history of the Solomon Island natives' headhunting past. As a result, the place is filled with shrines made up of real human skulls. According to the Solomon Times, the island is quite difficult to get to, and tours are only given by tribal chiefs, making this Skull Island the closest thing you'll find to Kong's fictional home — at least in terms of exoticism.

So just because there's not really a Skull Island filled with giant monsters in the South Pacific, that doesn't mean there aren't actual Skull Islands in the world that are just as cool. Well, almost as cool.