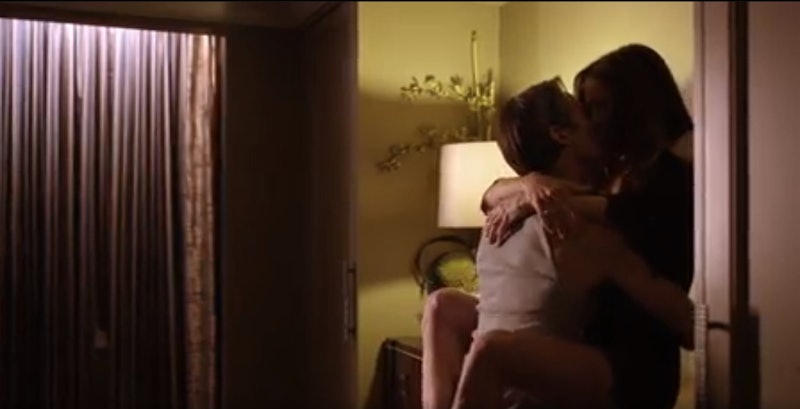 While a teacher having an affair with a student has certainly happened, it's unlikely that Lifetime's new movie Sleeping With My Student is based on a true story. Not only is it not billed as a "ripped from the headlines feature," which typically distinguishes the network's films based on real events, but it sounds like it doesn't take long for the story to turn from an illicit rendezvous between a manipulative teenager and his unwitting high school principal into a tale of murderous revenge. Lifetime has adapted plenty of wild stories for the small screen, but it's hard to believe a teenage boy is mature enough to plan such an elaborate evil scheme.

According to Sleeping With My Student's official description, it follows school headmaster and single mother Kathy (Gina Holden), who has a fling with 18-year-old Ian (Mitchell Hoog) while on vacation. When Kathy returns to school and sees that Ian is one of her students and that he's getting a little too close for comfort with her daughter Bree (Jessica Belkin), she realizes their hookup was no coincidence.

It quickly becomes apparent that Ian is "a very troubled young man," and Kathy doesn't want him anywhere near her daughter. However, keeping him away seems all but impossible and it's not long before he kidnaps Bree to get to Kathy, who he blames for splitting up his own family by having an affair with his late father, leading to his dad's death. Ian clearly has a violent streak and Kathy and Bree's lives are in danger, but how the movie will end is basically the only thing the Sleeping With My Student trailer doesn't give away, despite being only 30 seconds long.

Most Lifetime movies have roughly the same set-up — psychopath manipulates woman to get revenge and is eventually caught, though not always before someone dies — so it's likely that Sleeping With My Student will follow a similar path. After all, it seems that Ian's reputation for having a bad temper is pretty well-known, so it's unlikely that fingers wouldn't point directly to him if he does manage to seriously harm Bree or Kathy.

There's also the fact that, for all the high-stakes, over-the-top drama at the core of Lifetime movies, they all tend to wrap up pretty neatly, with justice being served to the villain. Because of that, it's hard not to feel confident that Kathy and Bree will manage to escape Ian, though that's not to say they won't be traumatized as a result of their experience with him.

What will be most exciting to see is how they figure out to outsmart him (which again, shouldn't be hard to do with a teenage boy). See it all play out when Sleeping With My Student premieres Friday, Oct. 18 at 8 p.m. ET on Lifetime.