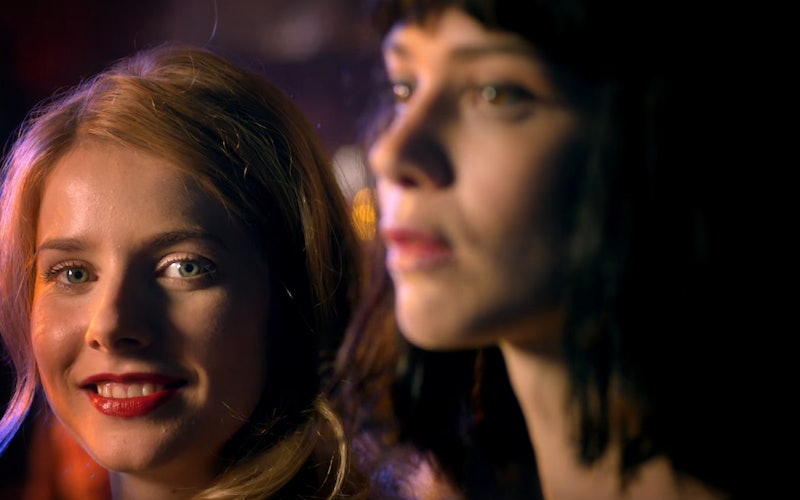 These days, there's an immense amount of pressure on young students to find success both during and after they finish college, which is one of the main struggles at the heart of Pop's new series, Clique. The show, which first premiered on BBC in March and will make its American debut Nov. 7, follows Georgia (played by Aisling Franciosi), Holly (played by Synnove Karlsen), and a number of other college students as they compete for elite internships at a company called Solasta Finance. And thanks to a mysterious marketing campaign that ran before the series aired, plenty of fans have already wondered if Solasta Finance is a real company.

First and foremost: no, Solasta Finance isn't real. It's a work of fiction created exclusively for Clique. However, BBC Three kicked off the show's marketing campaign with a controversial choice. According to the Advertising Standards Agency (ASA) of Britain's website, on Feb. 19, 2017, the network began a five-day campaign that included only advertisements for a seemingly real company: Solasta Finance. They created a Facebook, Twitter, and Instagram account for the company, as well as a commercial that featured actor Rachel Hurd Wood encouraging ambitious young women to apply.

The ads sparked outrage and confusion on Twitter, where people were divided over whether or not they could believe the company telling women to "act like a man" in order to get ahead in business was legitimate. But after five days, BBC Three revealed that Solasta Finance was only a part of the upcoming series, and not actually real.

Many social media users were still angry at what they thought to be a damaging ploy used to garner interest in a TV show. Blogger Leigh Campbell wrote a post title "Feminism and Irresponsible Marketing: The Problem with Solasta Finance," where she included multiple screenshots and quotes from the Solasta campaign, and explained why she found it to be a reckless choice on BBC's part.

Ultimately, however, the ASA ruled that BBC had not committed a violation in its marketing for Clique. Among the reasons for their decision, they listed the fact that the original Solasta website had included a small count down to a reveal date, as well as link to the official BBC website for Clique. In addition, all marketing published after Feb. 24 was clearly branded as belonging to BBC Three and Clique.

According to the official ASA ruling, which was published on Aug. 23, 2017, the initial Solasta advertisements "were intended to spark intrigue and maximize discussion about Solasta Finance and its ‘Women’s Initiative’, to engender discussion about some of the issues in [Clique]."

Were the statements made by Solasta Finance's supposed social media accounts problematic? Absolutely. But it's an accurate depiction of the world in which Clique is set, and which — unfortunately — reflects the professional world for most women. The initial Solasta campaign for Clique might have been off, but the conversation it sparked is definitely one worth having.

More like this
How A Location Blunder Changed The Outcome Of 'The Capture' S2.
By Darshita Goyal
Kathy Hilton’s 'RHOBH' Controversy Wasn’t Entirely Caught On Camera
By Jake Viswanath
Here's What Jeffrey Dahmer's Dad Has Said About His Other Son, David
By Grace Wehniainen
Where Is Lionel Dahmer Today? Jeffrey Dahmer’s Father Reflected On The Serial Killer’s Death In 2020
By Brad Witter
Get Even More From Bustle — Sign Up For The Newsletter