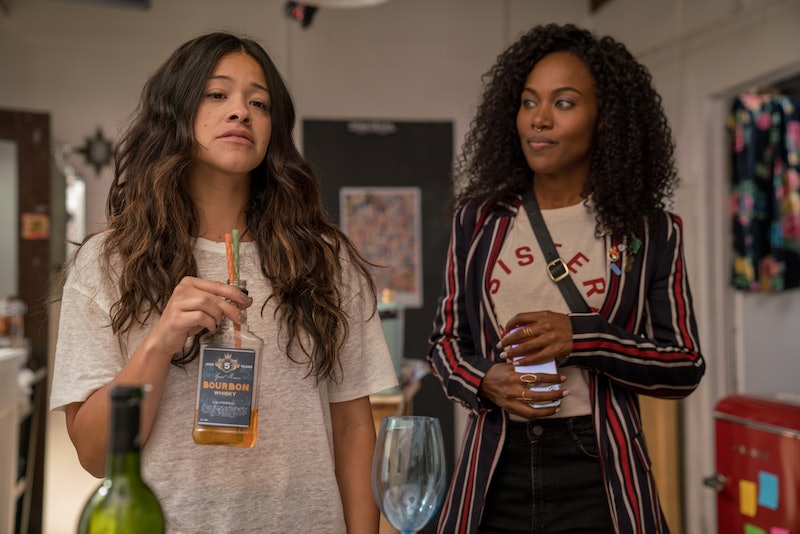 Netflix's highly anticipated Someone Great, streaming now, is a love story in the way that Bridesmaids is a love story. Or Girl's Trip. Sure, there's some romance involved, in the traditional sense, but writer-director Jennifer Kaytin Robinson was more set on making "a romantic comedy where a woman chooses herself," she wrote on Twitter. The friendship between Jenny (Gina Rodriguez) and her friends feels lived-in and real — as does her grief over her breakup — but Something Great isn't based on a true story.

While there is some real-life inspiration and coincidences, Someone Great is all from Robinson's imagination. An a 16-year-old aspiring actor living in Miami, Robinson first moved to Los Angeles for a Hannah Montana audition, she told Glamour. So while Rodriguez's Jenny went to NYU and studied journalism, Robinson didn't go to college. Instead, she turned her entertainment industry efforts into writing scripts, getting her first big break in Hollywood as a writer 10 years later when MTV bought her series Sweet/Vicious, as reported by Glamour.

Rodriguez, though, did go to NYU, as did her Someone Great co-star/real life best friend DeWanda Wise (best known for her starring role in She's Gotta Have It).

"We know those New York streets like the back of our hands and we have shared a lot in common with these women and the crazy that they went through," Rodriguez told Elle. "So for me it was very easy to pull back on my own personal experiences, which I don't necessarily always do, to be honest, so it was nice to play a little bit more of a down-to-earth, relatable character to myself."

Rodriguez told the Inquirer that the NYU flashbacks in Someone Great brought back a lot of memories.

"I went to the theater school, so there was a lot of time for craziness. All we did was act a fool, honestly," Rodriguez told The Inquirer. "We were taught how to let go of our inhibitions. Sadly, you shouldn’t always let go of your inhibitions. You should refrain, at times. ... But there was a lot of reminiscing from my college days, especially because DeWanda Wise and I were there together."

Although there are some jumps back in time, most of the film is told in the present, focusing on the bittersweet news that Jenny has just been offered her dream job at Rolling Stone (which, in the movie, is still based in San Francisco, despite having relocated to New York City 10 years ago, as reported in SFist). The problem is Nate doesn't want to leave New York, and breaks up with her. Distraught, Jenny goes to her best friends—Wise's Erin and Brittany Show's Blair—who decide to give her the send-off she deserves, a one night of adventure in the city that never sleeps.

“I leave in a week,” Jenny bemoans to her friends in the trailer. “And then I turn 30 and then I die, probably. I need one last epic weekend with my girls.”

What was most important to Robinson was that Someone Great is not the boy-meets-girl rom-com audience are conditioned to seeing. Instead, she was hoping to show young women they can have a loving, successful relationship with their best friends and with themselves.

"I really wanted to make a romantic movie, about a woman who is able to come out the other side of her relationship and be her own white knight, rather than [have it be about] the promise of another man being there," Robinson told Refinery29. "It’s really about a sisterhood [between three friends, played by Rodriguez, Wise, and Snow] and how much love and support is there. It's [that friendship that ultimately gives] Gina’s character the strength to feel okay with choosing herself."

The powerful story of loving yourself and your friends is at the center of Someone Great, and that love is shared in real life between all of the castmates.

"I've known this one forever and I'm so lucky I have her in my life," Rodriguez said of Wise, during an interview with Jake Hamilton. "And now I got a new one," she added of Snow. "Friends are hard to come by when you're in this industry, period. When you get a new one, it's a good feeling, man."

More like this
Here’s Everything Coming To & Leaving Netflix In July
By Grace Wehniainen
What’s New On Netflix: The Return Of 'The Umbrella Academy'
By Arya Roshanian
The 'Spiderhead' Movie Ending Is Nothing Like The Short Story It’s Based On
By Morgan Leigh Davies
Everything To Know About Netflix's Marilyn Monroe Movie 'Blonde' Starring Ana De Armas
By Grace Wehniainen
Get Even More From Bustle — Sign Up For The Newsletter