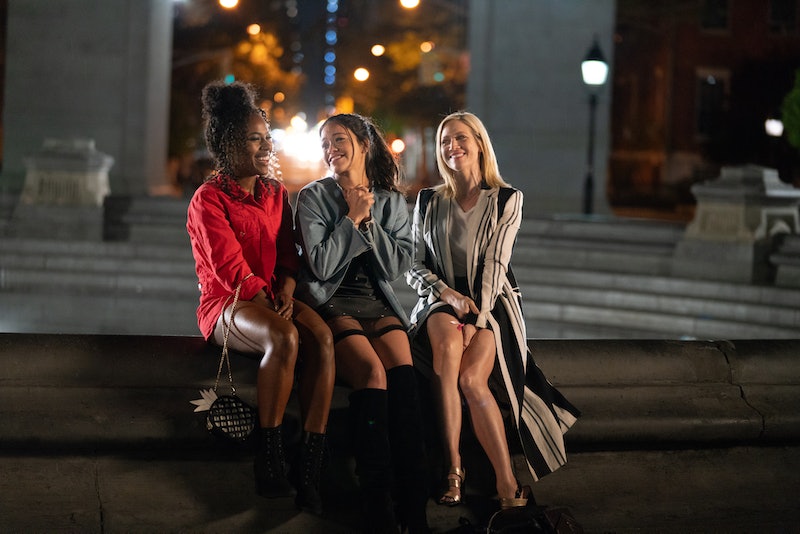 Robinson's rom-com, like most rom-coms, is about a couple and about love. But unlike most films in the genre, it's not about a couple falling in love, but about what comes after. And it's about friendship too.

With Someone Great, Robinson shares the focus evenly between main character Jenny's (Rodriguez) relationship with her boyfriend, Nate (Lakeith Stanfield) and her relationship with her two best friends, Erin (Wise) and Blair (Snow). Erin and Blair aren't just sidekicks; they each have their own distinct personalities and relationships that are explored, as well. (With Erin's storyline, as she hesitates to commit to a woman she really, really likes, this means highlighting "queer black love", which Robinson specifically set out to do.) So yes, the rom-com explores a romantic relationship, but it's also very much concerned with female friendships and about the reassessment of life that comes along with Jenny nearing her 30th birthday, plus a big career move on the horizon.

Robinson, who is known for her work creating and writing the beloved and short-lived feminist MTV show Sweet/Vicious, wanted to make a romantic comedy where a woman chooses herself.

"I wanted to make a deconstructed romantic comedy, where it wasn't the promise of the next romantic love that provides the film's narrative," Robinson says via phone ahead of the movie's release. Lest that worthy mission makes the film sound serious, rest assured that the comedy part of the rom-com is very much there, too. The first-time director adds, "But I originally pitched the film as 500 Days of Summer meets Drunk History."

Like the central love story in 500 Days of Summer, Jenny and Nate's relationship doesn't play out linearly. In fact, it begins with the news of their breakup. As for the Drunk History, a lot of substances are consumed. Motivated by her sadness, Jenny and her friends are on a mission to get tickets to a big music event, which involves a considerable amount day drinking (and some weed smoking with a drug dealer played by RuPaul). That action is intercut with flashbacks to various points in Nate and Jenny's love story.

Throughout this journey, the three friends confront issues within themselves and that they have with each other, and it was important to Robinson to keep all of these conflicts true to life.

And whatever you might be conditioned to expect from a movie that's about a girls' night stemming from a breakup, Nate is not painted as some huge jerk that the women spend their time hating. There also, notably, isn't a mention of marriage as something that causes additional tension with the couple, simply because it's not something Robinson's characters are interested in. "I think there are a lot of women that aren't out there hunting for marriage," Robinson says, "and feel very secure in their relationships without it."

Something Great is modern and pro-women, and nowhere is that more clear than during a sex scene between Blair and a male character. In the scene, Blair says things like, "We shouldn't be doing this," and he responds, "If you really want me to stop, I will." The moment of securing consent is seamlessly woven into the scene, and Robinson sees writing lines like these as her responsibility.

"I think that we as creators and storytellers need to be including [consent] in a way that doesn't feel like you're banging someone over the head with it," the filmmaker says. "I think the more that we show it just as an everyday part of life, the more that people are going to take that with them and it's going to become a part of everyday life." She adds, "I wanted it to feel really natural and really organic, but I also wanted to make sure that there was a very clear ask for consent from the man in that situation."

So, yeah, Someone Great is unequivocally a rom-com. But unlike the ones you may have grown up with, it's a diverse, modern rom-com about love and life and friendship that includes a very clear message about consent. Even with all the ways it subverts tropes, Robinson has one hope for her movie that many classic rom-coms have achieved over the years: re-watchability.