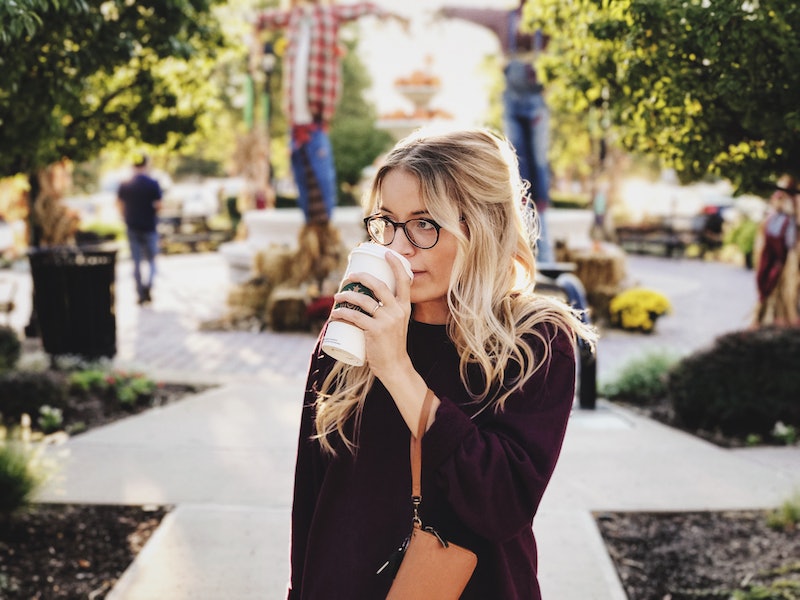 Each year, pumpkin spice season seems to inch a little earlier on the calendar. Here we are, still enjoying the lingering summer heat, while the ever-so-autumnal pumpkin spice latte has almost hit shelves — er, counters. This has led one of the most pressing questions facing our generation: Is the Pumpkin Spice Latte better hot or iced? Sometimes, frankly, it's too darn hot outside to enjoy any beverage that comes in an insulated mug, but nobody wants to kick off autumn with a subpar PSL. For those who don't feel like conducting a taste test of their own, let's explore the answer.

Created in 2003, the Starbucks Pumpkin Spice Latte has been available nationwide since 2004. Over the years, its release has become something of an event. This year, the Starbucks Facebook page even aired a pumpkin spice-themed livestream during Labor Day weekend to celebrate the drink's return. Despite reports of early launches in some stores, the official release date is still unknown, but in the past, it has taken place in early September — which means you may get your hands on the harbinger of fall long before the weather cooperates with your autumnal mood.

Back in the day, the drink was only available hot. Thirteen years later, however, it went the way of most Starbucks drinks, and you can now have it made hot or iced.

When you compare the two versions on the Starbucks website, they have the same ingredients. It looks like the only difference is whether it's poured over ice, but this tiny change makes a huge impact. Some people totally hate it; on the other hand, others seem surprised by how much they like the cold drink.

Let's face it. While the iced Pumpkin Spice Latte may be delicious in its own way, it feels like a totally different drink. Pumpkin spice is synonymous with fall these days, and cold drinks are simply too summery to fit in that category. Do you get excited for Halloween and crunchy leaves when you clutch a mug of cold pumpkin spice milk? I think not.

There's nothing wrong with enjoying the iced version, so don't worry about getting arrested by the Hipster Police for preferring a cold latte. But the Pumpkin Spice Latte has been around as a hot beverage since 2003, and there's a reason it's still popular more than a decade later: Back when it was created, it was meant to be hot. So if you're finally trying a Pumpkin Spice Latte for the first time, you'll probably want to start there — just consider waiting until the weather finally starts to cool down.