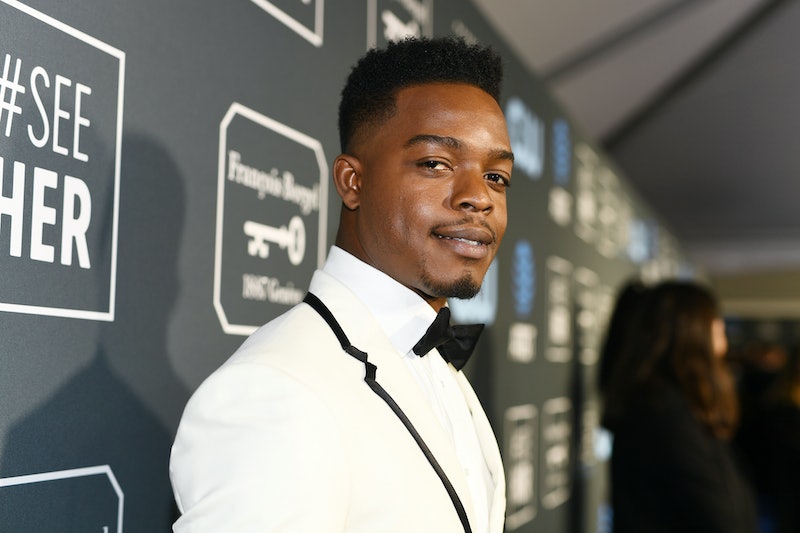 While he continues crushing it both on screen and off, this actor seemingly still likes to keep his romantic life private. But as his impressive résumé (and fame) grows, it's only a matter of time before fans will start to wonder: Is If Beale Street Could Talk's Stephan James single? The 25-year-old actor does seem to have a romantic partner, but for the most part he's keeping that part of his life to himself.

Since appearing in the acclaimed 2014 film Selma, the actor scored a 2019 Golden Globe nomination for Best Performance by an Actor in a Television Series for his work in Homecoming (with Julia Roberts). He also appeared in If Beale Street Could Talk, starring Regina King, which has received a handful of award nods and wins this year. Although James took his mom and brother to the Golden Globes as his dates, he does seem to have a significant other he's attended other events with while riding this exciting awards season wave.

In late January, James was photographed with a woman named Kaila Dickson at the WSJ. Magazine Talents and Legends Dinner in Beverly Hills. Getty Images captured the two, at a dinner table, with their arms wrapped around each other and her hand placed around his neck. They also posed together at the event with James' arm around her lower back, her hand placed on his chest, and their heads' leaned in together.

Earlier in January, the actor attended the InStyle and Warner Bros. 76th Annual Golden Globe Awards Post-Party with the same woman. They posed together on the event's red carpet wearing formal attire with their hands around each others' backs. Dickson doesn't seem to have a public social media account and it's not entirely clear if the connection between them is romantic or just friends. (Bustle reached out to James' rep in regards to the reported relationship, but did not receive a response.)

James posts a ton of photos from his event hopping, however, most of them are solo shots. Dickson is nowhere to be seen on his Instagram. In posts James shares that do have other people in them, he's usually hanging with celebrities like Brie Larson and Tracee Ellis Ross or Brad Pitt and Timothee Chalamet. No big deal.

The actor may be quiet about his personal life, but he's totally vocal when it comes to how grateful he is for his recent success. "Thank you @goldenglobes HFPA for recognizing me and BOTH these incredible stories I’ve had the pleasure of being apart of telling," he wrote on his Instagram regarding Homecoming and Beale Street's nominations in December. "Especially proud of these casts/crews. Sharing this moment with you all."

And his focus remains strong. Last December, James talked about his ambitions to be an actor with The LA Times. "I’ve always dreamed pretty big. I don’t think anything is going to change as far as that goes," he said. "[It's an] incredibly exciting time to have the opportunity to do things I care about, to do things I am excited about. I’m really just having fun." In a time when everyone shares details about their personal lives on the internet, James' approach is super refreshing.