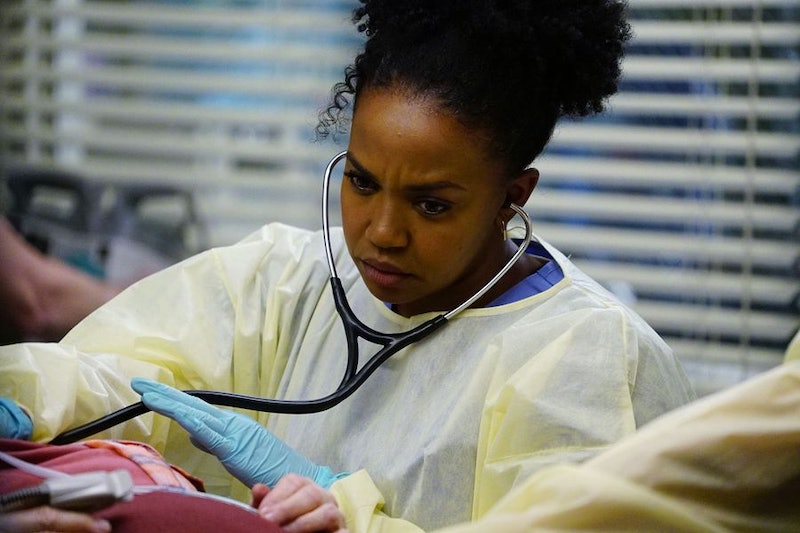 Richard Cartwright/ABC
By Lindsay Denninger
May 12, 2017

Oh, Shonda. Shonda, why do you do this to us? You giveth, and you taketh away. Stephanie Edwards was among the best and brightest at Grey Sloan, and now she’s in dangerous. Shonda, how do you come up with these storylines? Even that cute little girl from Big Little Lies can’t save Stephanie now. Is Stephanie dead on Grey’s Anatomy? She pulled out some mighty heroics in the penultimate episode of Season 13.

It all started as a normal day at Grey Sloan — a naked couple was brought into the E.R. with trauma because, the doctors assumed, they were having sex in a car and it rolled down an embankment. I can’t say that it’s ever happened to me, but I’m sure that it’s happened before to someone. Well, the doctors were almost right about the sex, but not about the circumstances — the couple wasn’t a couple, it was a man named Keith who hid in the back of a woman’s car and tried to rape her. She said, “Nah, I’m not going out like this,” hit the gas, and the car flew down the hill. Pretty dope and quick thinking of her, don’t you think? The problem is that Keith made it seem like the girl was his lady and that he needed to see her right away when she woke up out of surgery. It seemed sweet, but now we know it was just to cover his tracks. Stephanie, romantic she is, agreed to wheel Keith to see his “lady” (even though he has a bad liver laceration that could kill him), and when out of sight of anyone, he attacked Stephanie with a scalpel and took her hostage. Oof. She wasn't even supposed to be in the hospital!

Keith dragged Stephanie around the hospital, which went on lockdown as soon as everyone figured out Keith was a criminal and not a boyfriend, and Keith and Stephanie got trapped with a little girl in a random space in the hospital. Keith set a fire to let the sprinklers off and unlock the doors, and Stephanie, hero that she is, tried to save herself by dousing Keith in an accelerant and setting him ablaze. Success, because she is smart and fierce. Unfortunately, Keith was on fire a little too close to the oxygen tanks, and there was a huge explosion at the hospital. Oh, Stephanie! I looked like this at the end of the episode:

I would love to say that Stephanie survived that blast — because she is a hero and saved that little girl in the process — but I don’t think so. I think Stephanie is a goner, mostly because it’s been confirmed that Jerrika Hinton, who plays Stephanie, isn’t coming back to Grey’s Anatomy for Season 14. Stephanie doesn’t deserve to go out like that, y’all, so I hope that this is a Shonda Rhimes fake out and not the actual end. I’ll be tweeting #SaveStephanie at Shonda until the Season 13 finale of Grey’s Anatomy.