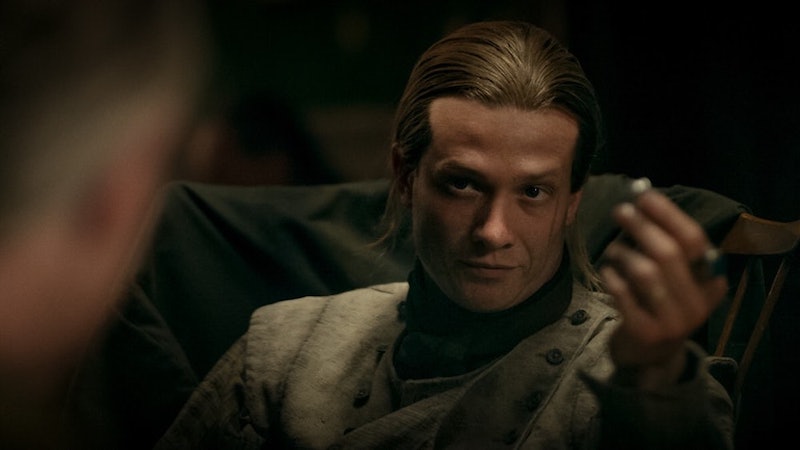 Spoilers ahead for Outlander's Season 5 premiere. After an ambiguous Season 4 ending, Outlander's Season 5 premiere seemed to confirm the worst: Stephen Bonnet is still alive. Shortly after Brianna and Roger's wedding, Lord John Grey pulled Jamie aside for a chat, during which he mentioned that there had been reported sightings of Bonnet in the Provence. Unbeknownst to them, Brianna overheard the entire conversation and began having flashbacks to her assault.

Though a brief scene, this suggests that Bonnet's role in the show isn't over. That doesn't necessarily mean he'll appear in later episodes — actor Ed Speleers, who plays Bonnet, isn't credited in Season 5 on his IMDb page. But those familiar with the Outlander books shouldn’t be surprised by this turn of events, especially since Bonnet’s near-death experience was a major departure from the original story.

In Diana Gabaldon's book Drums of Autumn, Bonnet actually helps Brianna lead others to safety just before the prison explodes, unlike on the show where he was seemingly trapped in his prison cell. Outlander executive producer Maril Davis told The Hollywood Reporter last year that they made this change simply because there wasn't enough time to include it in a way that made sense — and because they wanted to up the stakes. "Sometimes with books this size, things fall by the wayside," Davis said. "We also wanted to end this on a little bit more of a cliffhanger on whether or not Bonnet lives or if he's killed in this explosion.”

Of course, it may not have felt like much of a cliffhanger to book readers, who know the continued presence Bonnet will play over the next several seasons (spoiler alert: he doesn't get any nicer). It's unclear how long it'll be before Brianna will once again have to come face-to-face with this vile character, but now that he knows her child could be his, it may incentivize him to stick around and show up when the Frasers least expect it.