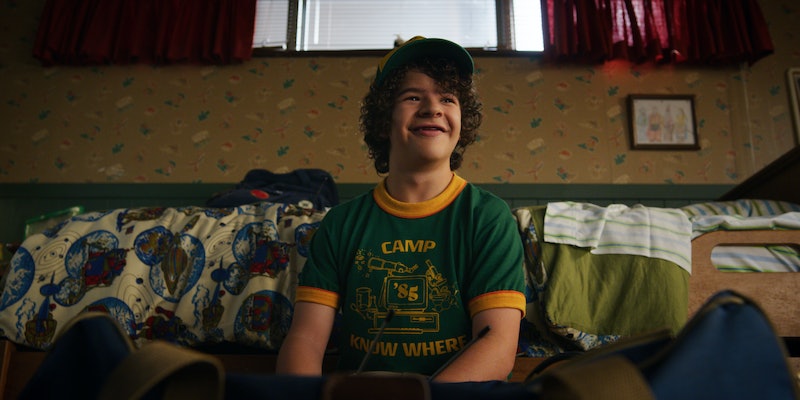 Spoilers ahead for Stranger Things 3. It's 1985 in Stranger Things 3 and the kids are all growing up. Mike's dating Eleven, Lucas is dating Max, and even Dustin has a new girlfriend — even though his friends are all convinced Suzie isn't real. But while it may take the whole season, Dustin eventually proves them wrong — and in a delightfully nostalgic singalong that's perfect for the show.

For all the spoiler-hungry fans reading ahead, here's how it all goes down. When Dustin returns to Hawkins from Camp Know Where, he claims to have a genius girlfriend who is even "hotter than Phoebe Cates." Immediately, his friends think he's making her up, and it doesn't help that when he tries to radio Suzie, she doesn't respond. But while Dustin may be a number of things — a bit of a know-it-all, a nerd — you can't really call him a liar. (Except, of course, for that time he kept the existence of his pet Demodog Dart a secret.) As Mike teaches Eleven: friends don't lie.

It's particularly insulting, then, that Mike, Lucas, Will, Max, Erica, and even Steve don't believe that Suzie is real. But hey, even the Duffer Brothers were being a bit vague about Suzie. "When we meet Dustin this year, he has just returned from science camp — and he may or may not have a brand-new girlfriend," Matt Duffer told Entertainment Weekly ahead of Stranger Things 3's release.

Dustin gets a bit distracted from trying to connect with his "Suzie-poo" after he discovers a secret Russian group underneath the Starcourt Mall is trying to reopen the Upside Down. But in the Stranger Things 3 finale, he successfully enlists his Salt Lake City girlfriend's help when Murray Bauman can't remember Planck's constant.

You see, Hopper and Joyce need to know the physics quantum in order to turn off the machine splitting apart the gate to the Upside Down in the Russian's lab. Without Google to tell them it's 6.62607004 (remember, it's 1985), Dustin does the next best thing and radios his mathematical whiz of a girlfriend. The only catch? She first asks he do something rather embarrassing, because Russian spy games, super deadly supernatural creatures, and saving the world are no excuse for Dustin ignoring her.

Although the stakes are outrageously high for Hopper, Joyce, and Murray underground in the Russian lab, Suzie-poo asks her Dusty-bun to sing their favorite duet, "The NeverEnding Story" from the 1984 fantasy film of the same name. It's a magical song full of fun and wonder that highlights the spirit of their relationship. But it also serves as a comedic break before tragedy strikes, since Hopper then seemingly dies in the explosion caused by Joyce closing the Upside Down's portal.

But hasn't that always been the tone of Stranger Things? A little bit of nostalgia and levity mixed in with a lot of danger, heartache, and action? The Suzie reveal makes for a bittersweet final few minutes of the season, but a fitting one nonetheless.

More like this
'Stranger Things' Season 5 Will Echo Season 1 In A Key Way, The Duffer Brothers Confirm
By Kadin Burnett and Sophie McEvoy
Does 'Locke & Key’s Ending Mean There Could Be A Season 4?
By Sophia Moore
'The Sandman’s Ending Is A Departure From Neil Gaiman’s Comic Book Series
By Kadin Burnett
‘Stranger Things’ Stan Megan Thee Stallion Grilled Natalia Dyer About Nancy & Steve
By Brad Witter
Get Even More From Bustle — Sign Up For The Newsletter