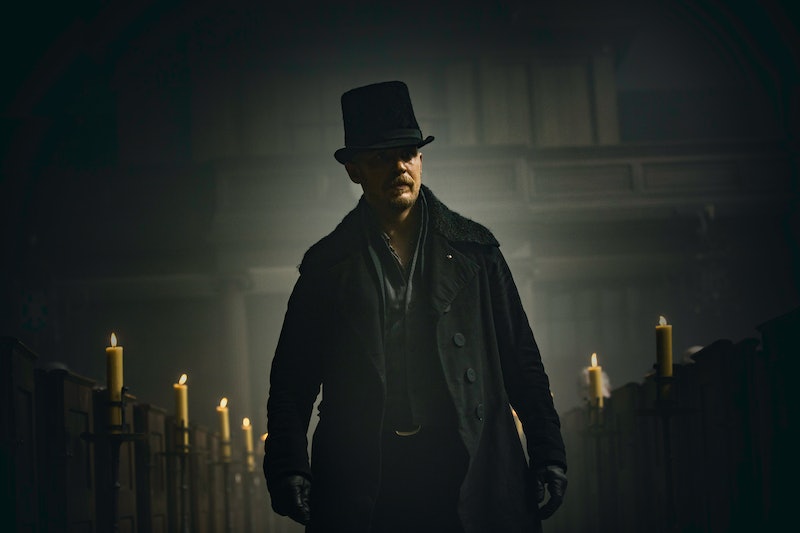 If asked to imagine a British period piece, one would probably conjure up Elizabeth Bennet taking a turn about the room, the Crawley family concealing a scandal, or even a shivering Dickens character. The new FX series Taboo, however, is not your average period piece. The series, which premieres on Tuesday, Jan. 10, chronicles James Keziah Delaney's return to London from Africa to claim his inheritance, which puts him in conflict with the East India Company. Given that historical context, you may think that Taboo is based on a true story, but the plight of Tom Hardy's James Delaney was actually created for the TV series.

Yes, the East India Company and the disputed land on the series are real, but the actual plot of the dark FX series is fictional. In an interview with Yahoo TV, Taboo co-creator Steven Knight discussed his inspirations for Taboo and why he gravitated to this specific era in history. He explained that the show was originally slated to be set in another period, but the "monopoly" of the East India Company in 1814 led him to pursue that setting. If he was basing the series on a real historical figure, he wouldn't have had such flexibility. Knight also discussed his inspirations for creating Hardy's character and said:

"In that year, the East India Company had their monopoly taken away by the British crown, so not only did you have conflict between the crown and the biggest multinational conglomerate the world has ever seen, you also had all of these international conflicts as well. What I wanted to do was take a character and throw him into that madness that was going on at the time. It was like an explosion that was just continuing to happen. That’s why I felt that if you’re going to have an adventurer return from Africa, this is the London they should come back to."

Though the work may be fictional, Taboo does draw from reality. The premise is that Delaney inherits a piece of disputed land, the Nootka Sound. That is a real parcel of Vancouver Island off the coast of British Columbia and according to the Radio Times, it really did cause conflict throughout history.

The East India Company was also real and Taboo has already garnered some controversy for its dark portrayal of the trading company. According to a 2014 Telegraph article, the BBC broke with Taboo because it did not agree with the show's characterization of the East India Company as a big, bad multinational corporation. Economic historian Doctor Tirthankar Roy told the Telegraph:

The East India Company might've had a positive economic impact, but that doesn't mean it was all good. It was involved in the slave trade and the slaughter of indigenous people, so there is a real dark side for Taboo to explore.

Though the show's portrayal of the era is controversial and the plots are fictional, Taboo still provides an interesting look at a real historical time period. Who knew a period piece could be so intense?