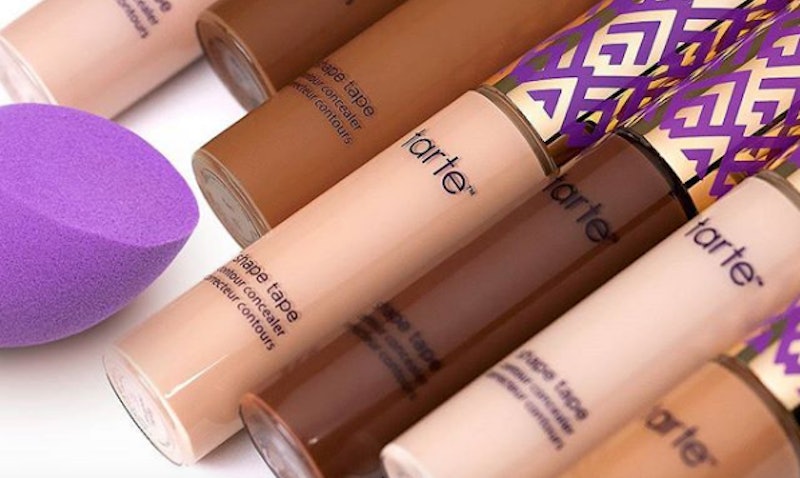 If you thought last year's beauty launches were good, just wait until you see what 2018 has in store. According to the brand's social media sneak peeks, a Tarte Shape Tape Foundation could be on the way. The brand already teased the possibility last year, but their latest Instagram photo is giving fans even more to go on. The product already has a cult following, and it hasn't even been announced yet.

Ever since Tarte's Shape Tape Concealer popped on the scene in 2016 the makeup world has been changed. Bloggers and YouTubers have already deemed it one of the best and it's even one of the "best contouring products of 2017," according to Allure. The constantly sold-out product has gained an even wider shade range in the past year, and now it looks like it might just be shape shifting.

According to Tarte's Instagram page, a new Shape Tape product is coming this year. The brand didn't say exactly which product will be on the way, but they did share an equally insightful and frustrating video with their fans. The Instagram post shows a bunch of longer, wider Shape Tape signature chevron printed applicators sitting in a pile.

If you put all the past and present clues together, all signs point to a Shape Tape Foundation.

Of course, the brand has yet to officially announce anything. There's a small chance that this could just be a different finish of concealer. But Tarte has been sneaking in clues about a new foundation formula for a while now. I don't want to get your hopes up, but there's a good chance that it will be what it looks like — Shape Tape Foundation.

News of the Shape Tape Foundation first started going around after Kathleen Fuentes, aka YouTUbe KathleenLights, posted a tweet in January of 2017 saying, "@tartecosmetics can we get a shape tape foundation ?!?! lol."

Tarte Cosmetics sneakily replied back with "we were thinking the same thing... (winking emoji)." Since then, fans have peen (no-so) patiently awaiting the launch from the brand. This could just be the year that people get what they've been wanting.

It's worth noting that there's also a "Shape Tape Family" section available on the Tarte website. So I'd say that it's time to get excited.

Beauty brands love to tease their launches, but Tarte's clues were a little different. They chose to give their fans a little clue into what could be coming while then staying silent for an entire year. That might be frustrating to fans, but odds are that it means that they've been working hard to find the perfect formula. Fingers crossed that it's worth the wait, if that's even what this Instagram post means.

If you haven't tried the product already, you can snag it in stores and online at Ulta as well as on QVC and the Tarte website for $27.

Like I said before, Tarte's Shape Tape Foundation already has a cult following — and the idea hasn't even been officially announced yet. People love the concealer, which currently comes in 14 shades, so it's no surprise that they love the idea of a foundation too.

Here's what people have to say about the possible launch.

I'm not saying to get too excited, but definitely get a little excited.

It's being deemed the foundation to end all foundations and the product isn't even out yet.

"Hi, I'd like to purchase 300 of your possible Shape Tape Foundations, please."

Don't die before the launch!

It's the best present a makeup lover could ask for.

It looks like Tarte will have you covered in the new year — literally.