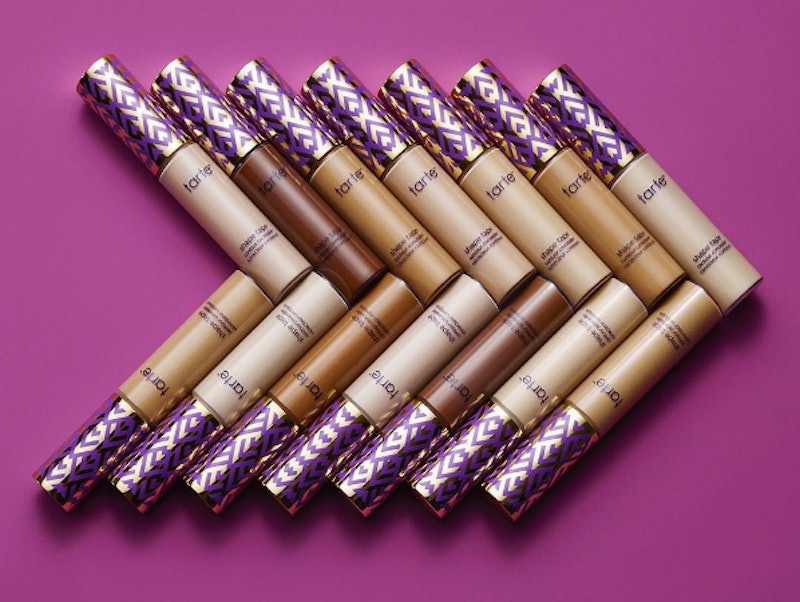 Stop what you're doing, because major makeup news is here. According to a tweet between Kathleen Fuentes, aka KathleenLights, and Tarte, a Shape Tape Foundation could be in the works. Let that sink in for a moment. That means that you could have a smoothing, non-creasing, all-over base to go with your concealer. There's no word on when the Shape Tape Foundation could come out if it does happen, but fans are already excited by the initial rumor. Bustle has reached out to Tarte to ask about the possible foundation.

Brands love to tease their fans on social media. They're constantly posting sneak peeks of products and upcoming launches, but this time was a little different. It started with a YouTuber's tweet. Fuentes sent out a message to Tarte asking if fans could get a Shape Tape Foundation, which got over 800 likes on Twitter. The company soon tweeted back saying "we were thinking the same thing..." accompanied by a wink face emoji.

Now, I've written about a lot of social media clues in my day, and that definitely sounds like something to be excited about. Tarte's Shape Tape Concealer is raved by a ton of beauty YouTubers, including Fuentes. If the rumored foundation was even half as good as the existing concealer it would be a guaranteed hit.

Let me break it down for you, for those who aren't familiar with the makeup item. The Shape Tape Concealer came out in 2016. It went from only having a select number of shades to now having 14 color options and has been named the best of the year by everyone from Fuentes to Jaclyn Hill. It's unofficially the product of 2016. So having a matching foundation would make this the beauty duo to watch in 2017.

It's not just YouTubers that are excited about this rumor either. Of course it's not officially confirmed yet, but this is still promising. Fans are freaking out just at the idea of the product coming to life. Here's what people have to say.

Someone's on the lookout for that item.

To say the least.

My exact facial expression when I read the tweet.

Needless to say, a Tarte Shape Tape Foundation would be an instant fan-favorite.

More like this
"Transparent Eyeliner" Is The Perfect Summer Look For Makeup Minimalists
By Olivia Rose Ferreiro
TikTok's “Clean Girl Aesthetic” Isn't As Inclusive As You Think
By Tomi Otekunrin
The Best Beauty Looks From The 2022 BET Awards
By Audrey Noble
35 Ideas For 4th Of July Nails That Go Beyond Red, White, & Blue
By Audrey Noble
Get Even More From Bustle — Sign Up For The Newsletter