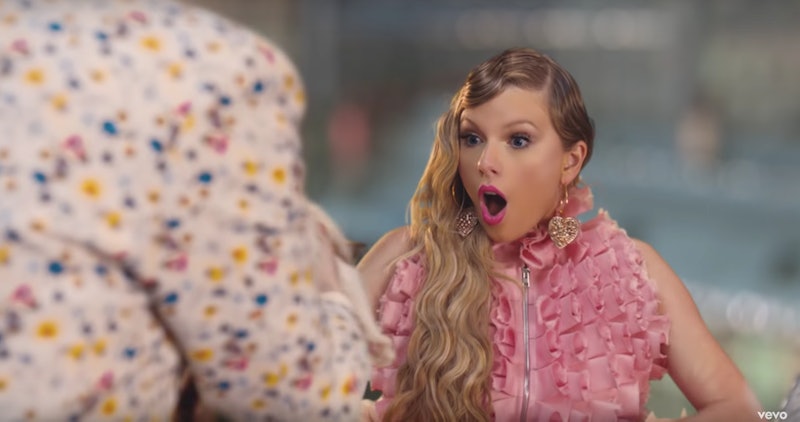 At midnight on Friday, April 26, Taylor Swift's highly anticipated countdown finally came to an end, and the next era of her music began. Swift's new single, "Me!" featuring Brendon Urie, is here — and so is the music video. Knowing how much Swift relies on symbolism, fans were combing the video for clues about her personal life, and one really stuck out that has people buzzing: A proposal featuring an adorable kitten. But what does this mean? Was it just an adorable music video moment, or is Swift engaged to boyfriend Joe Alwyn? (Bustle reached out to Swift’s rep for comment on the engagement speculation.)

The video starts off with Swift and Urie (whose characters are in a relationship) in an argument. In order to win her back, he offers up a ring, which she seems to shoo away, and then he presents her with a kitten, which is she is much happier to receive.

Since these little details in Swift's videos can sometimes represent things that have happened to her in her actual relationships, it's hard not to speculate that this could mean that Alwyn has popped the question — or that Meredith and Olivia have a new kitten sibling.

Fans began speculating about both possibilities:

But as it turned out, the kitten in the video did mean something more, because on Friday morning, Swift announced the good news herself on Instagram: She has, indeed, adopted a new kitten, and it seems to be the same one from the music video.

This kitten looks like the same one from the music video, confirming fans' suspicions that Swift has added a new cat to her crew.

There were also clues that Swift may have added to her cat family earlier this week, too, involving the mural she commissioned in Nashville. On Thursday, hours before releasing "Me!", she revealed that she was actually behind the colorful butterfly wings that had shown up in The Gulch — and that the different elements of the mural represented parts of her upcoming single.

In the mural, you can see that all three of Swift's cats are represented, and that's very intentional. In an interview with Newsweek, Courtney Montague, the manager and sister of Kelsey Montague (the artist who created the mural), said that the mural was originally made to seem like it was being commissioned by ABC and ESPN, and including two cats and a kitten was part of the guidelines that came with the assignment.

“It was interesting because they said butterflies, stars, rainbows and hearts,” Montague said. “And then it was specific about the number of hearts. And then they said cats, which we thought was interesting. Specifically, two cats and one kitten.”

Now, fans know that's because all three of Swift's cats — Meredith, Olivia, and this new kitten — appear in the "Me!" video.

All that's left to do is wait for Swift to announce her new addition's name. Judging by Meredith and Olivia's names, could she carry on the TV theme? Knowing Swift, the reveal could end up being pretty epic.

More like this
Sadie Sink Would Escape Vecna From 'Stranger Things' With This Taylor Swift Song
By Grace Wehniainen
Here’s How Lizzo Is Supporting Abortion Rights After The Roe v. Wade Reversal
By Brad Witter
Taylor Swift's “Carolina” Theme For 'Where The Crawdads Sing' Soundtrack Is Here
By Jake Viswanath
Anya Taylor-Joy Might Be Engaged To Her Musician Beau
By Jack Irvin and Sophie McEvoy
Get Even More From Bustle — Sign Up For The Newsletter