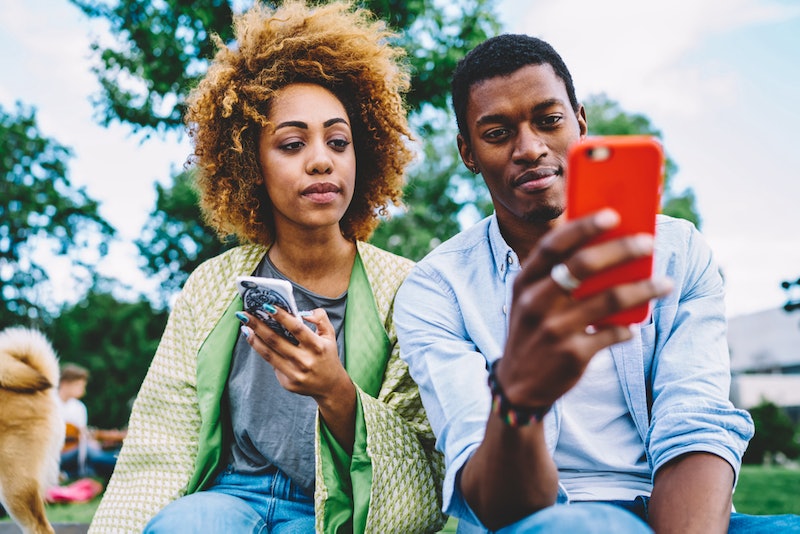 While number neighbor communication might seem all in good fun, it's also an easy way for scammers to phish for your personal information by spoofing their number so it appears that they're your number neighbor. Alternatively, your actual number neighbor could just be a scammer to begin with and use the game as an opportunity to collect your private deets.

"There are a few things you might want to think about before jumping digits first into Twitter's new number neighbor craze," Jo O'Reilly, a data privacy advocate at ProPrivacy.com, tells Bustle. "Whether you’re planning to send a message or merely responding to one received, if you introduce yourself with your real name you’re instantly giving away two key pieces of personal information to a complete stranger: your name and your number."

Personally, I get so many calls from spoofed numbers that I have an app to block them. And there is no way I'd return a text from a number neighbor because the last thing I need is more randos calling or texting me. If you decide to throw caution to the wind, and you get friendly with your number neighbor before you know who you're really talking to, you could unwittingly reveal personal details that might compromise your privacy and safety. Although your number neighbor could be a celeb like one excited Twitter user who learned they were allegedly number neighbors with Keanu Reeves (did that really happen?), chances are that's not the case.

"If the conversation progresses, and you share your age and location, they have a pretty good snapshot of your identity, should they want to look you up further, to find say a Facebook account. It’s worth remembering just how many of these online accounts your phone number is linked to, from WhatsApp to Snapchat," O'Reilly cautions.

While most people are number neighboring for fun and Twitter likes, O'Reilly says it's also a pretty easy way for unscrupulous types to steal your identity. "That might seem extreme, but games like this can be a complete goldmine to scammers, catfishers, and even those looking to groom the young or vulnerable. They offer an entirely plausible and innocuous excuse to reach out to a complete stranger out of the blue," he says.

In addition, it's unlikely your conversation with your number neighbor will stay private, even if they're not intentionally trying to expose your personal information.

"It’s also worth remembering before you send or respond to one of these messages, that anything you say in them can, and most likely will, be shared publicly on Twitter," he adds. "Once that happens, you have little control over who or how many people see it, especially, if as has already happened to several of these screenshotted conversations, it goes viral."

Aside from your digital safety, think twice before deciding to meet your number neighbor IRL. "Where this could all start to go wrong is if your number neighbor asks you to meet them somewhere, do something for them, send them pictures, etc.," Ross Cascio, an expert level Krav Maga Worldwide self-defense, fitness, fight, and kid's program instructor, tells Bustle. "Those are the kinds of situations that you would want to avoid. If you follow that logic then you might consider not texting your number neighbor at all because if you don't open that door, nothing can come of it. If you do text them then be ready to limit how much involvement you will have with that person. Don't go meet them somewhere by yourself, divulge personal information, [or] send them pictures you might regret."

The bottom line? It's always better to be safe than sorry. #TheMoreYouKnow