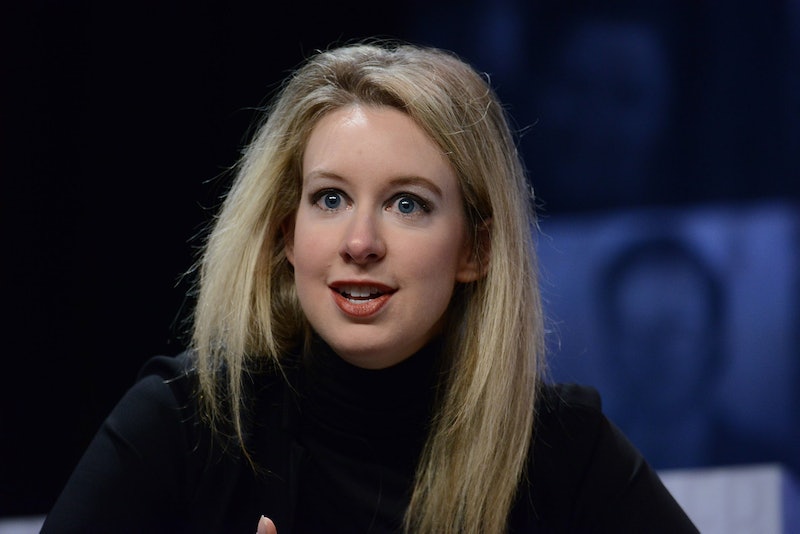 If you can't get enough of the summer of scam, you're probably following the ongoing coverage of Elizabeth Holmes, the founder and CEO of Theranos, who in June 2018 was accused of fraud by the Securities and Exchange Commission (SEC). (Holmes and Theranos' former COO, Sunny Balwani, who was also charged, have pled not guilty to the charges.) After the publication of journalist John Carreyrou's Bad Blood: Secrets and Lies in a Silicon Valley Startup, and ABC's podcast The Dropout, HBO has now thrown its hat into the ring with its documentary The Inventor: Out For Blood In Silicon Valley.

The documentary is the first to compile footage of Holmes in context of the accusations that the company's machines did not work. And this new flood of footage has people wondering what Elizabeth Holmes' body language says about her — especially that whole not-blinking thing. Patti Wood, an expert in deception detection and author of the book SNAP — Making the Most of First Impressions, Body Language, and Charisma, tells Bustle that "laser focus" allows people to charm those around them.

"It’s a charismatic body language behavior. It’s when you’re in their presence you feel like you're the only person in the entire world, that you’re the center of their focus and attention," she explains. "It’s a superpower really, and it affects your ability to think logically and go to your [brain's] neocortex and analyze what’s going on because it feels so good."

Holmes founded the healthcare company that eventually became known as Theranos in 2003 at age 19, after dropping out of Stanford. The company claimed to be developing technology that could analyze a fingerprick's worth of blood to detect myriad health problems. Before Theranos was accused of fraud, Holmes was lauded as the next Steve Jobs, and became the youngest self-made female billionaire in the world. The technology was eventually shown not to be functional and the company was defunct by 2018, according to a Theranos timeline of events reported by Business Insider.

As people try to unravel the mystery of how Holmes was able to court investors to fund the development of a product that allegedly did not work, many have made mention of Holmes ability to focus on people without blinking.

"We’ve all been told that eye contact is a good thing because it inspires trust," Body language expert and co-author (with Gregory Hartley) of the book How to Spot a Liar, Maryann Karinch tells Bustle. "This kind of eye contact is too much of a good thing. While telling the lie, it’s overcompensating for the lie," she says.

Wood says this prolonged eye contact is part of the laser focus tactic. She explains that the four factors of a first impression are credibility, likability, attractiveness, and power. When you're dealing with someone who is highly charismatic, the last three factors override your need to find the person credible, she says.

While anyone can fall prey to a charismatic person who is not well intentioned, there are some red flags to be aware of. "Watch out for 'robots,'" Henderson advises. "If the person you are with looks a bit stiff and robotic, [it means] they are gesturing without any connection to their spine in an attempt to suppress their real behavior. Essentially, they are putting on a show for you which is not genuine and could be a scam."

Karinch says that in addition to too much eye contact, lack of eye contact is another sign someone isn't being honest with you. The person you're speaking with may also engage in self-soothing gestures. "We call them adaptors — such as rubbing fingers together, rubbing the neck, playing with a pen or piece of jewelry," she says.

Additionally, Wood says that your body may alert you that the person you're dealing with is being less than truthful. You might feel unsettled, uncomfortable, or experience a rapid heart rate. Sometimes this can be mistaken for excitement. Alison Henderson, a certified movement pattern analyst and author of the book Reducing The Drama in Business Relationships, agrees.

"Trust your gut. If you think you may be scammed, it is your limbic brain reading the subconscious behavior and alerting you with that 'sinking feeling,'" she explains. "Ask questions, call the person out to see if you are right, or simply walk away."