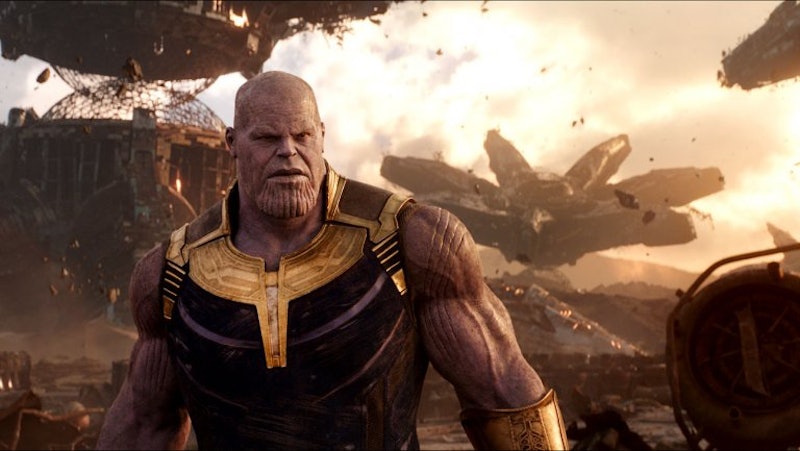 Spoilers ahead. As promised, Avengers: Infinity War blew everyone's minds, but nobody quite expected the movie to break their hearts as much as it did. With half of the universe wiped out, it's hard to imagine how the MCU will even continue after this, and that largely depends on whether or not Thanos is actually dead. Seeing as the end of the film had the note, "Thanos will return," fans should be both terrified and relieved to know that the big bad likely isn't really dead.

Thanos is in pretty bad shape at the end of Infinity War, thanks to Thor's newly minted axe, but he probably survives. After all, he has the Infinity Gauntlet, and regardless of how damaged the iron glove became in the end, Thanos is now basically invincible with each of the Infinity Stones. If something happens, he can either go back in time to fix it — like he did with killing Vision at the end of the movie — or twist reality to repair the gauntlet somehow. The same goes for Thanos' chest injury, caused by Thor's axe-whack. As the villain told Thor, the viking hero should have gone for Thanos' head, because otherwise he can just use the power from the Infinity Stones to heal himself.

The Avengers might just have to go for Thanos' head when they inevitably face him again in the untitled Avengers 4 movie, set to come out May 3, 2019. If Thanos were to have died at the end of Infinity War, it might have created an even greater problem for the Avengers. Say he did die on whatever planet he appeared on right after leaving Wakanda — how would the Avengers find the Infinity Gauntlet without him? Sure, there could be a way if some aliens who inhabited Thanos' getaway island wanted to help Thor and his buddies out, but more likely, it would just delay the process of undoing the genocide that Thanos triggered with the snap of his giant fingers.

So, as strange as it is, Thanos' survival at the end of Infinity War is probably a good thing. This way, the Avengers can track the evil demigod down and do what he told Thor to do: go for his head. The main goal for the next Avengers movie will definitely be to return all of the lost superheroes — or at least the ones who disintegrated into thin air at the end of Infinity War. That might either need to involve finding Thanos and getting the Infinity Gauntlet from him, or it could be more complicated.

One of the main theories about Avengers 4 revolves around Gamora, as she might be the key to actually defeating Thanos during the second time around. Since Thanos made it clear that he loves his adopted daughter — before sacrificing her in order to get the Soul Stone — some believe that Gamora will somehow become the only way to destroy the villain.

In a recent interview with Empire, the directors of Infinity War, Joe and Anthony Russo, fueled theories that Thanos' demise might come from his emotional connection to Gamora. "He doesn't have a weakness and that is what makes him so threatening," said Joe, as reported by Express. "You have to find vulnerabilities for characters of that level of strength. Look for their emotional and physical life — that's where we figure out how we make those characters crack."

If there's one place that Thanos could crack, it's with regards to Gamora. Even though the villain didn't seem to blink while pushing her off the cliff, he did have a vision of her as a child right after he completed collecting every Infinity Stone. Whatever ends up happening in Avengers 4, Thanos will probably have to be alive to bring everyone who died back to life, so it's really for the best that he will come back in the next movie.