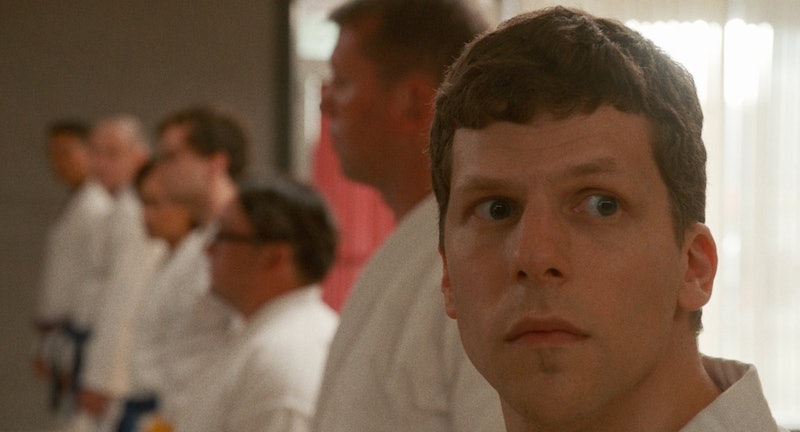 Jesse Eisenberg has proven that he is capable of portraying virtually any character, from Lex Luthor to Mark Zuckerberg. In his latest film, The Art of Self-Defense, he plays an accountant who takes karate lessons after getting mugged, and becomes obsessed with his new discipline. So is The Art of Self-Defense a true story, or is it a complete work of fiction? Fans know that Eisenberg is plenty capable of portraying characters both fictional and real (see Luthor, Zuckerberg), so which category does his newest vessel fall into?

The film is not based on a true story. The Art of Self-Defense was written by its director, Riley Stearns, and it's a wholly fictional tale. The filmmaker's initial inspiration, however, did come from a real place: his experience with martial arts. "I’ve been doing jujitsu for about six years now. I really wanted to kind of write something set in the world of something that I was having fun doing and I also thought that setting something in the world of karate but then exploring ideas that maybe you wouldn’t expect to explore sounded interesting," Stearns told Slash Film's Danielle Solzman. "It just kind of becoming a pretty organic process once I realized it was gonna be a martial arts film and putting my own ideas and fears and thoughts into it. It just came about pretty quickly."

Although Stearns' experience with martial arts classes provided the inspiration for the setting and plot of the film, it wasn't necessarily the driving force behind the movie. The director also wanted to comment on masculinity; specifically toxic masculinity. "That was the main reason I wrote this movie. I was questioning what it means to be a man," Stearns told the Seattle Post-Intelligencer's Tim Hall. "I didn’t feel as masculine as I thought I should. I was out of shape, slightly depressed, inactive, and didn’t feel like I belonged to something. I started thinking about what the definition of a man is, and realized they’re all these archaic tropes. You can just be yourself. To think that there’s one version of a man is ridiculous."

In addition to his desire to create a film about a martial arts class that examined the culture of toxic masculinity, there was a third factor that went into Stearns' crafting of The Art of Self-Defense, and that was the director's desire to upend audience's expectations of the typical underdog sports film. In the movie, Eisenberg's character Casey is taught a toxic form of karate by a hyper-masculine sensei, which leads to all kinds of problems that aren't seen in your average underdog tale. "[In many sports films] Somebody who’s an underdog trains and works hard and eventually overcomes, or in the process of trying to overcome loses but ultimately gains more in their loss than they would have in their win. I didn’t want that to happen in the same way," Stearns told Slash Film's Fred Topel. "I wanted a movie that started off in that vein, then as it went along, essentially halfway through the film I wanted the rug to be pulled out from under you and you be woken up in a way that you thought you knew what was going to happen, and you have no idea."

The Art of Self-Defense is purposefully realistic in its low key depictions of a meek man seeking confidence at a karate dojo, but don't let those depictions fool you. The film is not a true story, but rather a unique — and dark — examination of masculinity's role in society today.

More like this
Gerard Butler Insisted On Adding This Pivotal Scene To 'Plane'
By Catharina Cheung
Jemima Khan Used Her Own Life As Inspo For 'What’s Love Got To Do With It?'
By Darshita Goyal
Your Guide To Watching 'Everything Everywhere All At Once' In The UK
By El Hunt and Sophie McEvoy
Kukulkan From 'Wakanda Forever' Has A Surprising Connection To Marvel History
By Grace Wehniainen
Get Even More From Bustle — Sign Up For The Newsletter
From hair trends to relationship advice, our daily newsletter has everything you need to sound like a person who’s on TikTok, even if you aren’t.