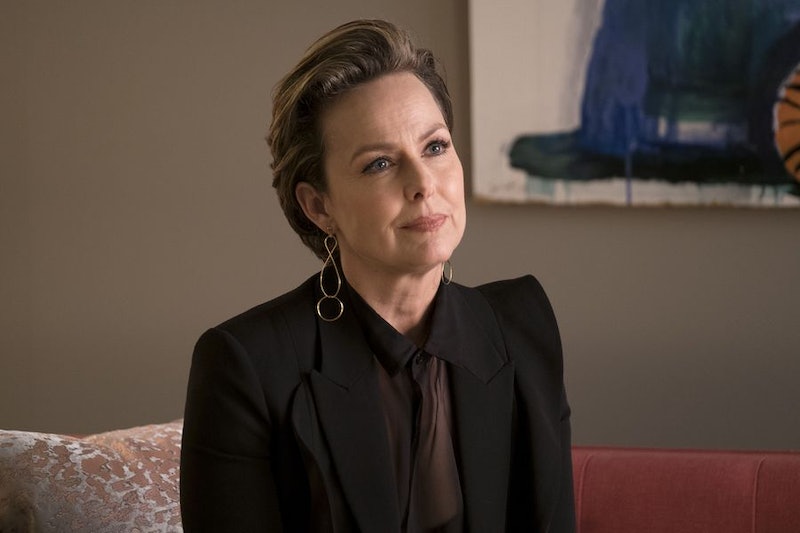 Since the show follows a handful of New York City-based magazine employees, it's reasonable to wonder if The Bold Type is based on a true story. The show is based on the experiences of Cosmopolitan editor Joanna Coles, who is clearly the inspiration for the thoughtful, slightly cynical editor character, Jacqueline. But, according to Coles, she was also the inspiration for the young writers at the show's center. "[The Bold Type] is loosely inspired by 30 years I've had in the workplace," Coles tells Bustle. "My best friends are the friends I met in my early days in my 20s when we were all going through stuff together." So, the struggles of the young women and the experience of their older boss, both based loosely on Coles, are synthesized into one show.

However, The Bold Type has made some changes to Coles' experiences to better reflect the realities of 2017: the young women working at Scarlet are now a social media manager and personal essayists who wonder if their intensely personal focus is getting in the way of good journalism. They look for marginalized voices and can tell when things are problematic.

Showrunner Sarah Watson tells The Hollywood Reporter that she met with lots of current Cosmopolitan employees while developing the series. "I met with probably 25 different employees there of all different levels and I talked to them about what they did, and I even spent some time with the interns that work out of the beauty closet," she said. And while every detail can't be taken directly from life, Watson said she tries to make sure The Bold Type feels accurate.

But lest you think some of the most eccentric storylines must be fictional, you'd be surprised what aspects of The Bold Type are based on real experiences. "Many of the incidents — including the incident in the second episode when someone gets a vaginal yoni egg, uh, stuck — are based on true incidents at the magazine," Coles said to The New York Times.

Overall, the show also seems to be taking as much inspiration from the 2017 edition of Teen Vogue as it is Cosmopolitan. While most traditional magazines have been shaking things up in order to better appeal to a more socially conscious reader, it was Teen Vogue that made an immediate impression with its 2016 election coverage, outspoken third-wave feminism, and the credo that fashion and activism were not incompatible. "I think women do want to care about multiple things, and women are alive and empowered in this way that I think they have been for a long time. I think the world just hasn't been paying attention," Watson told The Hollywood Reporter.

Ultimately, the most accurate aspect of The Bold Type is probably the relationships between the young women at its core. "We all rose and fell at different times, and... were sometimes envious of each other, but we still became and stayed friends," Coles tells Bustle.