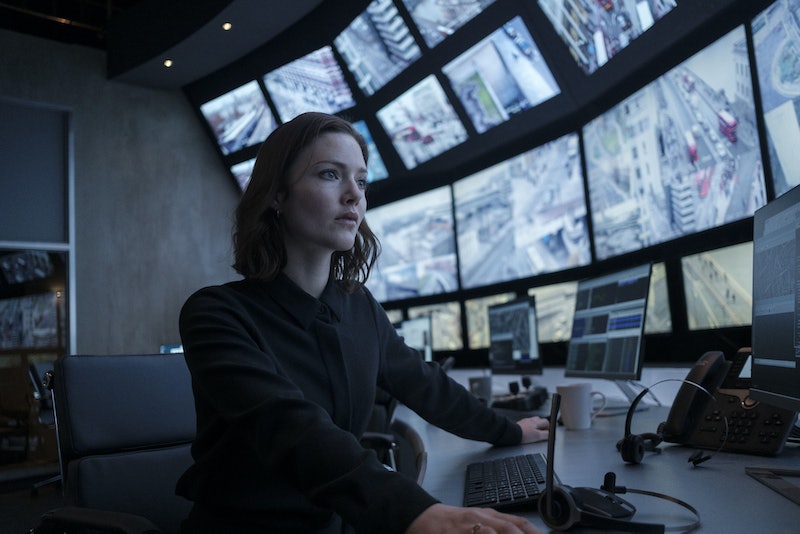 If autumn means one thing, it's that there are a bunch of new series on the way that are sure to grab your attention. ITV started it off with their crime drama A Confession last night, and now it's the BBC's turn with The Capture. Starring Ralph Ineson, Holliday Grainger, Ron Perlman, and Paul Ritter, the drama jumps into the world of fake news and the disastrous effects it can have on an individual. With that in mind, is The Capture based on a true story?

The six-part series, which begins tonight on BBC One, follows soldier Shaun Emery (Callum Turner) whose life is being dictated by video evidence. First, the murder he was convicted of is overturned due to flawed video evidence. But new CCTV footage of the soldier on a night out places him in a negative light. Because of this, the series puts viewers in a rather unique situation, as more often than not they'll end up knowing more than the characters do at any given moment.

In an interview with the BBC, show creator Ben Chanan described how the current era of fake news, surveillance, and the intricacies of video evidence could be translated into a narrative. Chanan started working on The Capture two years ago, and in that time the issues included in the series have only increased further. "Now, barely a week goes by without a new warning about the potential horrors of facial recognition, deep-fakes or fake news," he said. "Perhaps we will soon have to find new ways to judge the veracity of video footage."

"My ambition starting out was to create a modern-day conspiracy thriller that evoked the mood and paranoia of my favourite 1970s post-Watergate movies, The Parallax View and Three Days of The Condor. I had no idea our current era would be such a good fit."

So it seems that The Capture is partially based on actual events, but the narrative arc of the series is fictional. I've reached out to a rep for the show to clarify whether the characters are based on people IRL, and they tell Bustle that the series itself is "based on [Chanan's] own research (and existing knowledge of the subject matter from his years as a documentary maker) but the story of Shaun Emery (Callum Turner) and Rachel Carey (Holliday Grainger) is a work of fiction."

Chapman has sort of confirmed that the series is somewhat intertwined with the real world, as he recently explored in an interview with The Guardian. "When I first took it to the BBC, they said to me 'this is set in a heightened reality, correct?' And I thought, well, I'm really not sure that that's actually the case."

"And then, as it got closer and closer to filming, it began to seem as though it wasn't heightened at all. People would send me Guardian and Observer stories about the effect of fake news on a weekly basis."

The show creator then combined the realities of fake news with the abundance of video surveillance watching our every move. "We walk around every day with CCTV all around us. Video evidence is regularly used by the police and in courts and we're increasingly comfortable with that. We don't mind that Big Brother is watching." He continued:

"Yet what's interesting is how easy it might be to abuse that comfort. Because if software can take somebody's audio and sample it and make them say what we want, how can we ever entirely trust a police confession or any audio archive? If you then apply that to video evidence as well, what happens then?"

The Capture begins tonight on BBC One at 9 p.m.