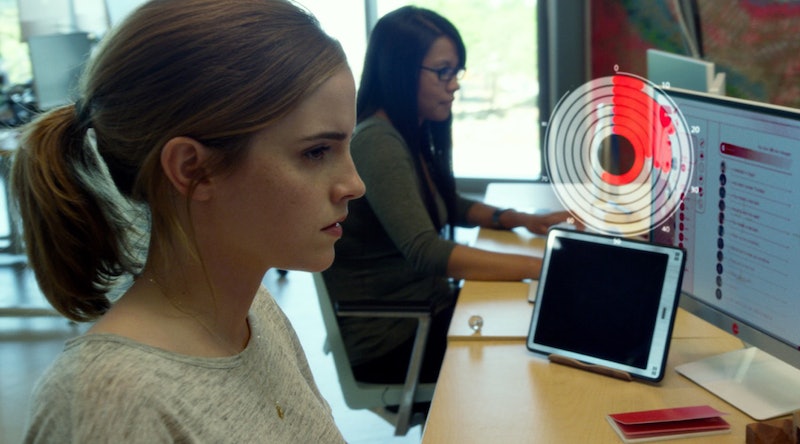 Cautionary tales about technology are nothing new for Hollywood, but stories about major internet companies and Silicon Valley are a bit more rare. In The Circle, one such major company provides the setting and the conflict, updating the science-fiction trope to modern-day social commentary. Based on a book by Dave Eggers, The Circle is about a mysterious internet company, the titular Circle, which is described as a massive enterprise encompassing both social media and video technology. Both the movie and the book take a lot of inspiration from big Silicon Valley companies, like Apple and Facebook, but is The Circle based on a real company?

The Circle does everything: emails, social media, online banking, image and video sharing, etc. Such an all encompassing business doesn't appear to be based on any one tech company, but is rather an amalgam of all successful companies currently gaining a monopoly of the tech market. For example, The Circle has mysterious founders idolized within the company, reminiscent of Steve Jobs at Apple, and the SeeChange device rolled out in the book, a small camera that sends out real-time video, is not so many steps ahead from a GoPro or a smartphone. The idea of communicating through constant video streaming is akin to Periscope or even Snapchat, two hugely popular technical advances in social media.

When The Circle was first published in 2013, many readers and critics compared The Circle to Google, a company that has successfully streamlined email, search engines, and social media. It is also famous for its Googleplex headquarters in California. Eggers himself has denied any direct comparison between Google and The Circle. "The book takes place after a company called The Circle has subsumed all the big tech companies around today," Eggers said in an interview with publisher McSweeney's. The author added that he never visited Google, Facebook, or Twitter headquarters and did not speak to any employees before writing his book.

That said, it's easy to find aspects of every big tech company in The Circle, some made even more evident in the film adaptation. Take the character of Bailey (Tom Hanks), the charismatic founder who runs massive announcement events wearing jeans and a black turtleneck sweatshirt — an obvious take on Jobs. (Though Hanks did tell Twitter CEO Jack Dorsey "I played you!" during a live Q&A promoting the film.)