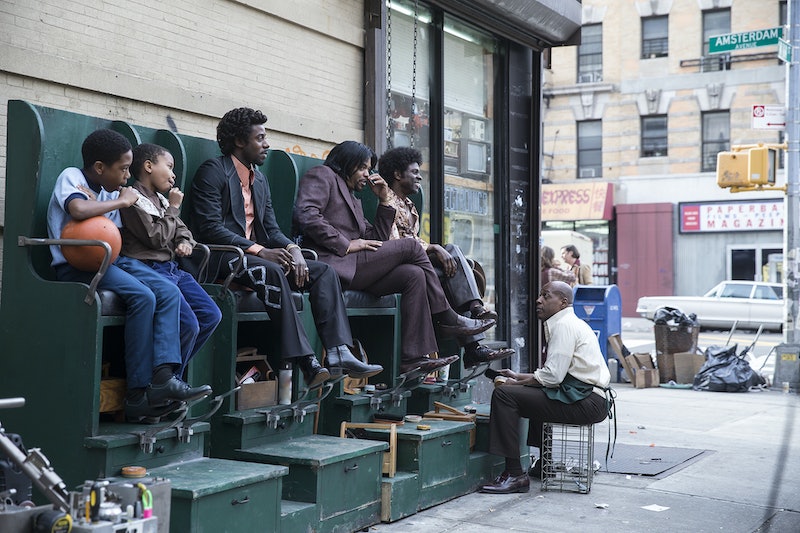 While watching HBO's The Deuce, the show is so dedicatedly unglamorous — even when movie stars like James Franco and Maggie Gyllenhaal walk onscreen — that it almost feels like traveling back in time. But is The Deuce based on a true story? The answer, as with most David Simon dramas (other examples: The Corner, Treme, Show Me a Hero, and, of course, The Wire), is that the series is not completely accurate, but the show is greatly dedicated to recreating its setting.

In The Wire, the series used location shooting, an enormous cast, and Simon and co-creator George Pelecanos' combined journalistic and novelistic experience to create a portrait of the Baltimore war on drugs that was far-ranging and empathetic to many perspectives. So far, The Deuce seems to be heading in the same direction. Even though the series is just beginning, it's already introduced about a dozen characters, and even the five different sex workers in the pilot episode are already distinct in their business practices, attitudes, and circumstances. Some of those characters are based on real people — according to The New York Times, several mobsters featured on the show were real fixtures in both organized crime and the new adult film industry. That includes James Franco's twins, Frankie and Vincent Martino, who existed in real life (although with different names) and served as the inspiration for the story after Simon met with one of the twins and learned about his story.

Nothing is simple on this series, and that includes even the show's approach to production, which is unfailingly detailed. According to the first episode's behind-the-scenes look, director Michelle MacLaren, an experienced TV director who has also brought some of the best episodes of Game of Thrones and Breaking Bad to the screen, specifically ensured that every single advertisement on the marquees behind the characters when they step into Times Square is period-accurate. MacLaren told The Ringer that The Deuce's visual references will include real New York history as well. "There was a garbage strike in New York — it was long before Bloomberg, obviously — and there weren’t trees and the city was pretty dirty, especially this area," MacLaren said. James Franco, also a director on the series, echoed the same sentiment. "We have to create almost everything that's seen on our show," Franco said in the HBO clip below. Both directors referenced Martin Scorcese films like Taxi Driver as other obvious visual inspirations.

And, of course, in addition to the setting being meticulously recreated, the show's themes also take on a real shift that happened in the early 1970s, with the creation of the adult film industry. At the Television Critics' Association, Simon explained, "We’re arriving in the story in 1971, which is the point at which it’s going from being an under-the-counter, paper bag product to being street legal. At that point, it was funded largely in New York by the mafia," according to Paste Magazine. It's true, according to the New York Daily News, the so-called "Golden Age of Porn" began in the late 1960s and early 1970s — and a particularly famous X-rated film, Deep Throat, was released in 1972.

1971 Times Square and its approach to sex and the sex work industry may be long, long gone in 2017, but from the details of the clothes and advertisements to the show's storylines, The Deuce is prepared to take real history and fictionalize it just enough to ensure that audiences understand just how much has changed.

More like this
ITV's 'Maternal' Was Inspired By A Very Simple – & Unanswerable – Question
By Maxine Harrison
This 'Gossip Girl' Wardrobe Error Has Gone Viral On TikTok
By Alyssa Lapid
All The ’70s Easter Eggs You Missed In 'That ’90s Show'
By Grace Wehniainen
'Abbott Elementary' Fans Probably Missed This 'Parent Trap' Easter Egg
By Sam Ramsden
Get Even More From Bustle — Sign Up For The Newsletter
From hair trends to relationship advice, our daily newsletter has everything you need to sound like a person who’s on TikTok, even if you aren’t.