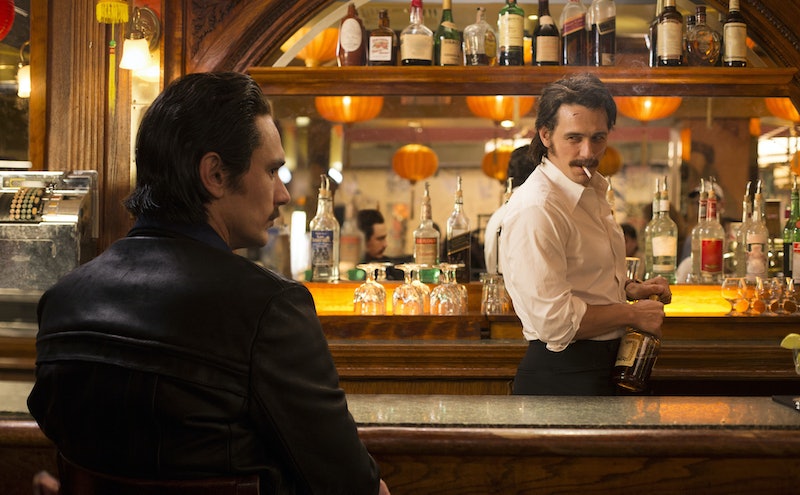 James Franco is a busy man and among his many projects is him pulling double duty by portraying twin brothers Vincent and Frankie Martino in HBO's The Deuce. With The Deuce coming from David Simon and George Pelecanos of The Wire and Treme, it's no wonder that it offers a realistic look at the growing pornography industry in 1970s New York City. Besides the showrunners' focus on authenticity, the HBO series is so realistic because James Franco's twins in The Deuce twins are based on real people. And while their names weren't Vincent and Frankie Martino, their story is what came to shape the latest HBO series.

As The New York Times reported, Simon and Pelecanos met with a man at the suggestion of an assistant locations manager on Treme. The man, who the showrunners declined to name, told them how he and his twin brother were mob fronts for bars and prostitution massage parlors in Times Square during the '70s. "The characters were so rich, and that's what it all comes down to," Pelecanos said to The New York Times about the stories the man told them. "We just said we have to do this," Pelecanos continued. So while most of the characters (with a few exceptions) in The Deuce were created by Simon and Pelecanos, Vincent Martino — the hardworking bartending twin — is based on the man that gave them the idea for the series.

Franco has also spoken of the "actual guy who had a twin brother," who not only led to his two characters but to the entire show, during The Deuce panel at the Television Critics Association's summer press tour in July. As Paste reported, Franco said his character was "a great sort of entryway for this story of New York at this time." However, unlike Simon and Pelecanos, Franco said he never met the inspiration for Vincent Martino since he passed away before The Deuce was filmed.

Along with the Martino characters and the story, the bar that Vincent manages also comes from the showrunners' unnamed source. Franco said:

"He had run this bar around the Times Square area that was very unusual because it was a melting pot of all areas of social levels. At the time, you certainly had gay bars and straight bars. But rarely did you have a bar where they would mix and they would mix with police officers and the [Andy] Warhol crowd and trans customers."