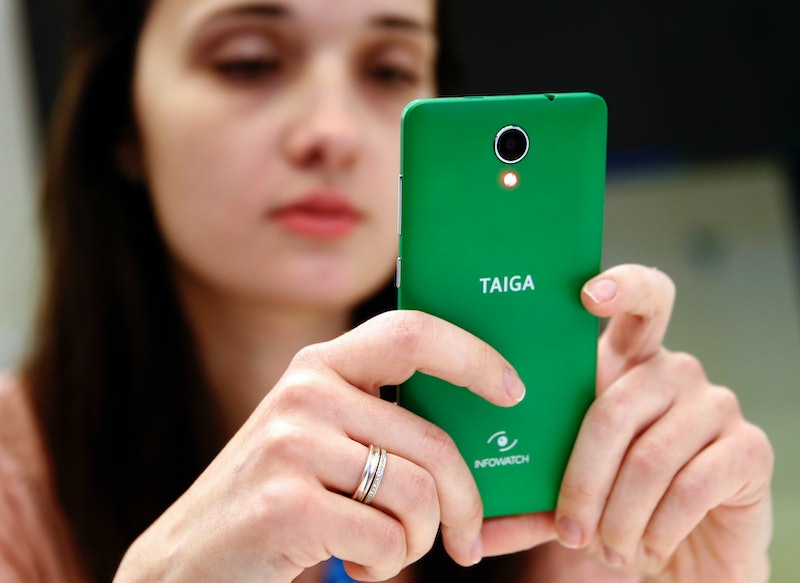 The Trump Administration has been pretty vocal about its intention to strengthen America's borders and reduce the number of immigrants coming into the country. But the administration is now planning to keep closer tabs on immigrants already on U.S. soil. According to a BuzzFeed News report from Tuesday, the Department of Homeland Security (DHS) plans to track immigrants' social media accounts and internet search histories — even if they are permanent residents or naturalized citizens. The DHS responded to the report on Thursday in a statement that noted the practice is totally normal.

According to BuzzFeed News, the new rule was quietly published in the Federal Register last week, and is scheduled to take effect on Oct. 18, which is the same day that President Trump's latest travel ban is set to take effect. But the DHS has pushed back, stating that this kind of monitoring is "not a new policy." In an emailed statement to Gizmodo, DHS officials said that "the notice simply reiterated existing DHS policy ... to search publicly available social media information of individuals applying for naturalization."

Searching publicly available online social media accounts seems routine enough. But what was most concerning to many in the initial BuzzFeed News report was the DHS' stated goal of "expanding" its available resources of surveillance to include "information obtained and disclosed pursuant to information sharing agreements." Basically, many are worried that because of this vague language, the DHS could access tons of immigrants' personal data stored by major companies like Facebook and Google.

Whether or not the practice is routine, human rights groups have already begun speaking out against the DHS regulations, claiming that they infringe upon civil liberties and an individual's right to privacy. In a statement issued on Thursday, Faiz Shakir, the national policy director at the American Civil Liberties Union, stated that the new rule "makes clear that the government intends to retain the social media information of people who have immigrated to this country, singling out a huge group of people to maintain files on what they say."

He went on to state that "this collect-it-all approach is ineffective to protect national security and is one more example of the Trump administration’s anti-immigrant agenda.”

Similarly, Faiza Patel, co-director of the Brennan Center's Liberty and National Security Program, criticized the policy for its ability to vet immigrants based on the ideological views they express on social media.

"The question is do we really want the government monitoring political views?" Patel told BuzzFeed News. "Social media may not be able to predict violence but it can certainly tell you a lot about a person's political and religious views."

This isn't the first time that the Trump Administration has attempted to use technology, specifically social media, as a part of Trump's promise to crack down on immigration. In fact, there have been a number of new policies social media immigration policies that have been enacted or suggested by the DHS in just the past few months.

Just weeks after Trump's inauguration, then-Secretary of Homeland Security John Kelly suggested to Congress that foreigners who wanted to visit the United States should be asked to hand over their social media passwords as part of an enhanced security screening. And in June, President Trump approved a new U.S. visa questionnaire that required applicants to list all social media handles.

As technology advances, it's no surprise that national security efforts continue to adapt to keep up with the change. But whether new policies come at the expense of immigrants' right to privacy, or inappropriately target specific groups based on their ethnicity or religion, is a question that should continue to be asked.

More like this
For These Abortion Clinic Volunteers, Going TikTok Viral Is A Risk Worth Taking
By Audra Heinrichs
Every Single Big & Small Way You Can Fight For Abortion Rights
By Tess Garcia
How To Protect Your Digital Privacy If You Need An Abortion Post-Roe
By Kaitlyn Wylde
The UK Abortion Laws In 2022, Explained
By Sophie McEvoy
Get Even More From Bustle — Sign Up For The Newsletter