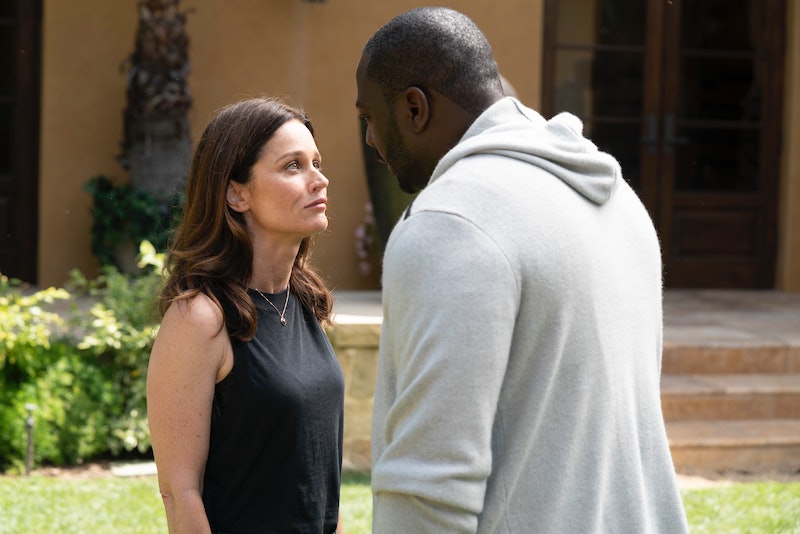 It's easy to draw comparisons between ABC's The Fix and the OJ Simpson murder trial, especially because Simpson case prosecutor Marcia Clark co-wrote and executive produced the series, according to TV Line. A preview shows that The Fix is about the murder trial of a famous black movie star who was found not guilty of stabbing his ex-wife. But while Clark brings a certain amount of personal experience to the show, The Fix is not based on a true story.

"Of course it takes my origin story, if you will. You know, a prosecutor who lost a very big case and then left the DA's office," Clark said in a video preview, as reported by TV Line. "From there it departs completely from me. From there it's all fiction."

In the show, the fictional high-profile black actor Sevvy Johnson is accused of murdering his ex-wife. He's adamant about his innocence and gets a not guilty verdict. That's very reminiscent of Simpson's trial. He was a beloved athlete and personality charged with the murders of his ex-wife Nicole Brown Simpson and her friend Ronald Goldman. He always said he was innocent and was ultimately found not guilty at his 1995 criminal trial. (In 1997 he was found "liable" in a civil trial and ordered to pay $33.5 million to Brown and Goldman's families, per the New York Times.)

On the show, after his not guilty verdict, Sevvy Johnson's girlfriend is found dead eight years later. The original prosecution team, led by Maya Travis, steps back in to try to take Sevvy down for good. Obviously that is a huge deviation from the real Simpson case. He was never accused of murder again and never re-tried for it. But, in previews, Clark has been calling the show a sort of "revenge fantasy" for her, since she didn't get to see Simpson convicted.

So it appears to get its own origin point from Simpson, but The Fix is a fictional show. Still, Clark did want to utilize her years of experience as a lawyer for the series, so the main character Maya will likely closely represent her. "I wanted to write The Fix because it really does wrap in all of my life experience," Clark, who also writes crime novels, said in the preview. "I lived through a high profile media circus," she added.

For her, it seems it was important to show a different side of a high-profile case. She added that "[the show] tells the story of what goes on beyond the TV cameras." Not necessarily what went on behind the cameras on Simpson's trial specifically, but in general what Clark's life was like as a prosecutor in LA.

If The Fix is based on anything, it's on Clark's life as a lawyer, and the cast said in the TV Line video that it was enormously helpful to have her expertise around. They could ask questions and have them answered by a real lawyer who's been there and done that. All of which will likely result in a highly realistic take on a fictional case when The Fix premieres Monday, March 18.