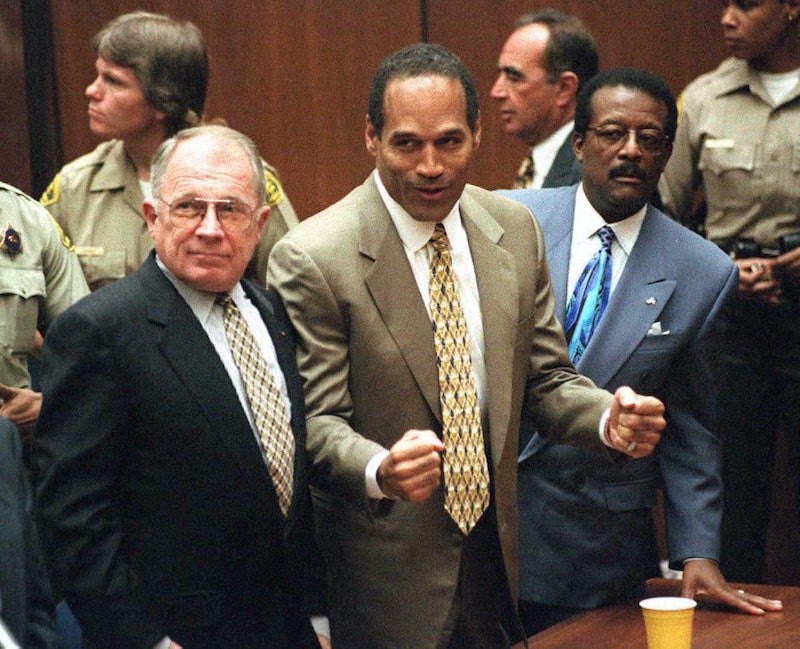 After a nine-month-long trial, it took less than four hours for the jury to find O.J. Simpson not guilty of the murders of Nicole Brown Simpson and Ronald Goldman, as reported by CNN. The season finale of The People v. O.J. Simpson: American Crime Story will show Cuba Gooding Jr.'s Simpson being acquitted, but even after seeing the show's portrayal of deliberations, you may be wondering why the jury found Simpson not guilty. After the verdict was read on Oct. 3, 1995, some jurors gave media interviews that explain how they came to their decision.

As the American Crime Story episode "A Jury in Jail" highlighted, life was not peachy for the jurors of the Trial of the Century. Along with being sequestered for eight and a half months, 10 jurors were dismissed from the case by Judge Lance Ito. The final group of 12 jurors who decided on the Simpson criminal case verdict was comprised of 10 women and two men of different races. In an initial vote, USA Today reported that 10 out of the 12 jurors voted to acquit Simpson and by the second vote, after some deliberation, the jury returned a unanimous decision of not guilty.

One of the most outspoken jurors after the verdict was Brenda Moran. According to CNN, during a press conference on Oct. 4, Moran said, "In plain English, the glove didn't fit," in reference to when Simpson tried on the pair of bloody gloves in court, leading to Johnnie Cochran coining the now iconic phrase, "if it doesn't fit, you must acquit."

Moran also said that she considered the prosecution focusing on a past incident of domestic violence between Simpson and his ex-wife Brown Simpson to be "a waste of time" and said, "This was a murder trial, not a trial about domestic abuse." While Moran couldn't say who she thought killed Brown Simpson or Goldman, she said she knew it wasn't Simpson and that the verdict "wasn't a matter of sympathy, it wasn't a matter of favoritism, it was a matter of evidence."

One of the only two men on the jury was David A. Aldana. While he was hesitant to give his exact reason for why he voted not guilty, Aldana did give an interview to The New York Times (that The Baltimore Sun also reported) where he said, "Things just didn't add up," referring to the evidence in the trial. In this interview six days after the verdict, he confirmed that he was completely confident with his decision saying, "I can sleep at night, no problem."

The other man on the jury was Lionel Cryer, who gave an interview to the Los Angeles Times a day after the verdict. "It was garbage in, garbage out," Cryer said about the evidence from the prosecution. "We felt there were a lot of opportunities for either contamination of evidence, samples being mixed or stored together." He also echoed Moran's sentiment that the domestic violence between Simpson and Brown Simpson did not affect the verdict because the prosecution only presented a 1989 incident when Brown Simpson was hospitalized, for which Simpson "pleaded no contest to a charge of spousal abuse," according to the New York Times. Cryer said of the evidence presented, "The 1989 incident was significant for all of us, because from '89 until her death, there were no other incidents where he touched her."

Cryer also will be known for being the juror who, when the jury was leaving the courtroom after the verdict, raised his fist in the air as an indication of solidarity with Simpson. "It was like a 'right on' to you, Mr. Simpson," Cryer told the LA Times. "Get on with your life. Get your kids. Be happy. Get some closure in your life."

A more conflicted juror was Anise Aschenbach, who initially voted guilty during deliberations. According to the San Francisco Chronicle, Aschenbach's daughter told ABC that, "She told me, 'I think that [Simpson] probably did do it, but what happened was the evidence was not there, mainly because of Fuhrman.'" Later, Aschenbach spoke out herself in an ABC telephone interview and said, "I thought it was possible [the glove] was planted ... And most of the evidence was DNA evidence and that's what was so shaky."

A less press-shy juror was Gina Rosborough, who appeared on The Oprah Winfrey Show on Oct. 4, 1995. Rosborough told Winfrey not only that she had "doubts [about Fuhrman] from the beginning," but also that she didn't think the evidence was there. "If [Simpson] had committed such a bloody crime, there should have been more blood in that Bronco." she said, referencing Simpson's car.

One of the last outspoken jurors in the direct aftermath of the case was Sheila Woods, who appeared on Nightline in a taped segment on Oct. 7, 1995. While she praised the prosecution, saying, "They did a good job with the evidence they had," she criticized the state's team for having Simpson try on the gloves in court. "I was stunned as to why the prosecution waited to come before us to let everybody see the gloves don't fit," Woods said. "Why weren't the gloves tried on Mr. Simpson beforehand?" Like some of her fellow jurors, she mentioned how Fuhrman's testimony ended up not mattering because "His credibility was basically shot" after tapes revealed Fuhrman used racial slurs when he had previously denied doing so under oath.

In a recent poll from The Washington Post and ABC News, a majority of respondents said they believe Simpson committed the two murders despite being found not guilty. However, these quotes make it clear that the jury members were confident in their verdict and stood by it.