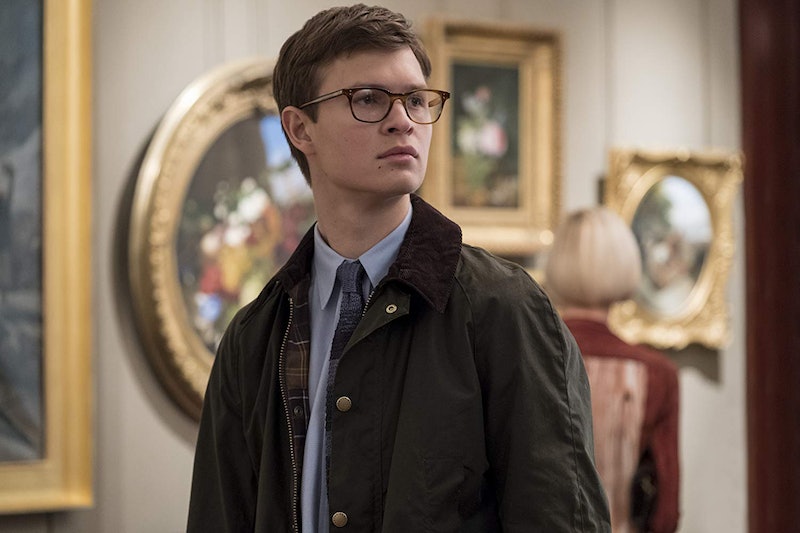 Based on the novel by Donna Tartt, The Goldfinch, premieres on Sept. 13, following Theodore Decker (Ansel Elgort) who as he navigates his past, recalling a time when he was 13 (Oakes Fegley plays the younger version) and his mother tragically died in an explosion at the Metropolitan Museum of Art. Left confused in the rubble, Theo steals a priceless piece of art that gives the book and movie its title. Tartt's book won the 2014 Pulitzer Prize for Fiction, which tells you that the majority of the story is invented But there's also a true story behind The Goldfinch painting that involves an explosion.

The Goldfinch is a 17th-century painting by Dutch artist Carel Fabritius. Fabritius was the pupil of arguably the most important visual artist in Dutch history, Rembrandt Harmenszoon van Rijn, and teacher to Dutch Baroque Period painter Johannes Vermeer who is known for Girl with a Pearl Earring, per the Frick Collection's website.

The Goldfinch shows a bird chained to its perch in a Dutch house. It's relatively small in size at 13 1/4 x 9 inches, which explains why it was easy for young Theo Decker to steal in the novel-turned-movie. Fabritius painted the masterpiece in 1654 — the same year the painter died in an extremely tragic and violent event.

The Guardian writes that the painter was among the victims of an explosion in Delft in the Netherlands, which is memorialized in Egbert van der Poel’s painting A View of Delft After the Explosion of 1654. A magazine containing at least 90,000 pounds of gunpowder blew up in the heart of the small town, taking the life of the 32-year-old and many others. And though the Dutch republic was still armed, protecting its independence after the Eighty Years' War with Spain, the explosion was no result of a battle or invasion. It was a meaningless accident, and The Guardian supposes that it must have been someone who was merely careless with a match.

In an interview with Powell's Books, Tartt said that the explosion and backstory of the painting was definitely a factor in choosing The Goldfinch as the painting Theo steals. (Theo isn't based on a real person, nor has their even been an explosion at the Met.) "The Goldfinch is a tiny painting — not much bigger than a child’s school notebook — and a greatly beloved and unique little work; in all the Golden Age of Dutch art, there’s nothing quite like it, and it also has a fascinating history that plays into the plot of the novel," Tartt said. "This little painting is one of Fabritius’s very few works that survive."

According to The New York Times, it took Tartt 10 years to finish the book, which is close to 800 pages long. She did her research and writing in the Allen Room at the New York Public Library’s flagship building on Fifth Avenue — no laptop, no Internet, just ballpoint pens and spiral-bound notebooks.

Aside from the painting and all the well-researched art history that went into the novel, the novelist's travels also served as inspiration. Though Tartt grew up in Grenada, Mississippi, she told Powell's Books, "Amsterdam’s a city I’ve spent a good deal of time with, and the germ of this book really began almost 20 years ago with a sort of dark Amsterdam mood." And The Goldfinch novel also goes beyond Amsterdam and New York, as it leads readers to Las Vegas, Nevada. This was brought about by a trip to Vegas, which Tartt told The Times she initially resisted — “It’s a long story,” she dodged.

Whether the book also draws from Tartt's own personal life is something that will remain a mystery, as the author is a very private person. The Times notes that she doesn't give many interviews. But you can read up, or, if you're ever in the Netherlands actually see the novel's main source of inspiration, which is currently on display at the Mauritshuis art museum at the Hague.

More like this
Gerard Butler Insisted On Adding This Pivotal Scene To 'Plane'
By Catharina Cheung
Jemima Khan Used Her Own Life As Inspo For 'What’s Love Got To Do With It?'
By Darshita Goyal
Your Guide To Watching 'Everything Everywhere All At Once' In The UK
By El Hunt and Sophie McEvoy
Owen Thiele Asked Sundance Attendees About Films That Don’t Exist
By Grace Wehniainen
Get Even More From Bustle — Sign Up For The Newsletter
From hair trends to relationship advice, our daily newsletter has everything you need to sound like a person who’s on TikTok, even if you aren’t.