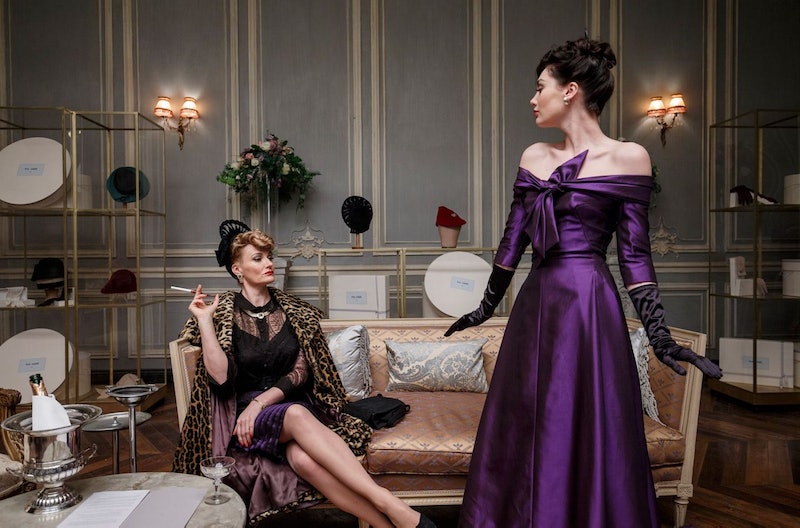 The only thing better than a period drama set in Paris is one that features a high-end fashion house — so, Amazon Prime's new series The Collection has all the makings of my next TV obsession. And, luckily, all eight episodes will begin streaming on Friday, Feb. 10. (Please excuse me for a moment while I cancel my weekend plans.) Set in post-World War II Paris, the series follows two brothers as they navigate the business of their rising fashion house. The series is historical fiction, but is the Sabine fashion company on Amazon's The Collection real?

The show's protagonists, Paul and Claude Sabine, have a lofty goal — to reestablish Paris as the center of the fashion world after the Nazi occupation. Paul is the shrewd businessman who networks with wealthy potential investors, while Claude is the brilliant but tortured artist who designs stunning gowns when he's not engaging in illicit affairs or going on extended benders. The Sabine brothers are fictional, and so is The House of Sabine — but showrunners drew from Parisian fashion history. According to Vogue UK, The Collection's creators say Sabine isn't based on one specific fashion house — but the outlet notes that "Dior is far and away the closet model for the Sabine brand."

The outlet reports that Richard Coyle, who plays Paul, spent a great deal of time studying Christian Dior in preparation for his role. In 1947, Dior presented a now-legendary collection at 30 Avenue Montaigne that "singlehandedly transformed the fashion world." But Dior's collection wasn't celebrated by everyone — many people viewed his excessive use of fabric, an item that had been strictly rationed throughout World War II, as decadent and inappropriate. In 1948, a young girl on the Rue Lepic had Dior attire torn off her body by older Parisian residents — and there's a similar scene in The Collection.

The New York Times also emphasizes the parallels between Sabine and Dior — the outlet describes the series as "a thinly fictionalized version of the Dior success story." The show's creators have stated that they drew inspiration from multiple Parisian designers, including Balenciaga, Fath and Lelong. Still, The New York Times notes some unmistakable similarities between Sabine and Dior — in The Collection, a French cotton magnate bankrolls the House of Sabine. Dior opened its doors thanks to funding provided by Marcel Boussac, a war profiteer and the country’s cotton king.

In the same article, The New York Times also observes that even the dialogue echoes statements made by Dior. For example, he once said: “In an epoch as somber as ours, luxury must be defended inch by inch.” Characters on the show make similar dramatic declarations such as “Nothing bold or magnificent is built from fear” and "Just remind people that Paris is where it begins and ends!”

So, although not every aspect of The House of Sabine is based on Dior, you may find yourself longing for one of the iconic designer's luxury items after you watch The Collection.