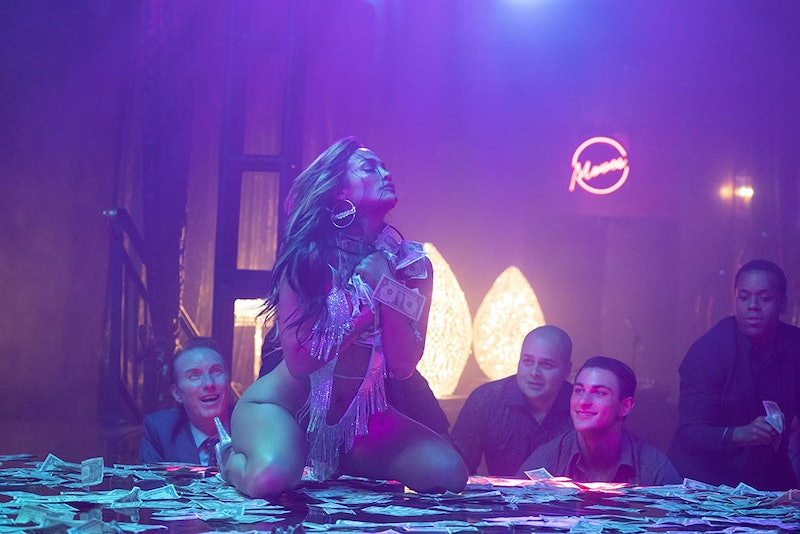 Premiering in theaters on Sept. 13, Hustlers is inspired by the article "The Hustlers at Scores" by Jessica Pressler, which appeared in New York Magazine in 2015. The movie is a fictionalized take on a group of former strippers who would "fish" for rich men they drugged and then brought to strip clubs, running up huge bills on their credit cards. While the events the film loosely adapts actually happened, some major changes have been made. For example, the club in Hustlers isn't real, but is actually an amalgamation of several Manhattan clubs that came into play in Pressler's article.

"The Hustlers at Scores" relies heavily on interviews with Roselyn Keo, who inspired Constance Wu's character Destiny. The real Keo was working as a waitress at the New City Diner in Nanuet, New York to help her grandparents make ends meet, but left that job to take a gig as a dancer at a nearby gentleman's club called Lace, where she made more money than she ever would waiting tables. Soon, she started commuting into the city to dance at Flash Dancers in Times Square and Larry Flynt’s Hustler Club. The Hustler Club is where she met her mentor Samantha Foxx, real name Samantha Barbash, who Jennifer Lopez's character Ramona is based on.

Aside from searching for marks in a Financial District TGI Friday’s and some upscale Manhattan bars, the real women would also contact former regular clients from Hustler and other strip clubs to meet up. Once they were in an especially agreeable condition, they'd bring the men to Scores in Chelsea or to the RoadHouse NYC Gentleman’s Club in College Point, Queens. There, they would charge them for private rooms, expensive meals, drinks and other services.

Eventually, New Jersey cardiologist Zyad Younan realized he'd been scammed. According to CBS News, Scores first sued Younan, because, according to their records, he owed the club $135,303 for "unpaid services" for one night in 2013. Younan disputed the charges, saying he did not authorize any of the purchases, and must have been under the influence of drugs he hadn't knowingly taken when he did.

Younan told police that he met Karina Pascucci, one of the women working with Keo and Barbash, at a restaurant on Park Avenue. She had claimed that she was a nursing student, then introduced him to Barbash, and another one of the women in their group named Marsi Rosen. On June 9, 2014, Barbash was arrested, per Mercury News, and other arrests followed.

Aside from the women, RoadHouse NYC manager Carmine Vitolo was also arrested and charged with conspiracy, per Qns.com. According to the New York Post, the women were charged with counts of forgery, conspiracy, grand larceny, and assault, to which all of them pleaded guilty. Pascucci and Rosen served weekends in jail for four months, and had five weeks of probation. Meanwhile, both Barbash and Keo didn't serve any jail time and were sentenced to five years probation. Vitolo was sentenced to a three-year probation.

In Hustlers, the club where Destiny, Ramona, Mercedes (Keke Palmer), and Annabelle (Lili Reinhart) once worked is also the place where they take the men they scam. While the setting of the film is dramatized, just the story, it's all based in truth.