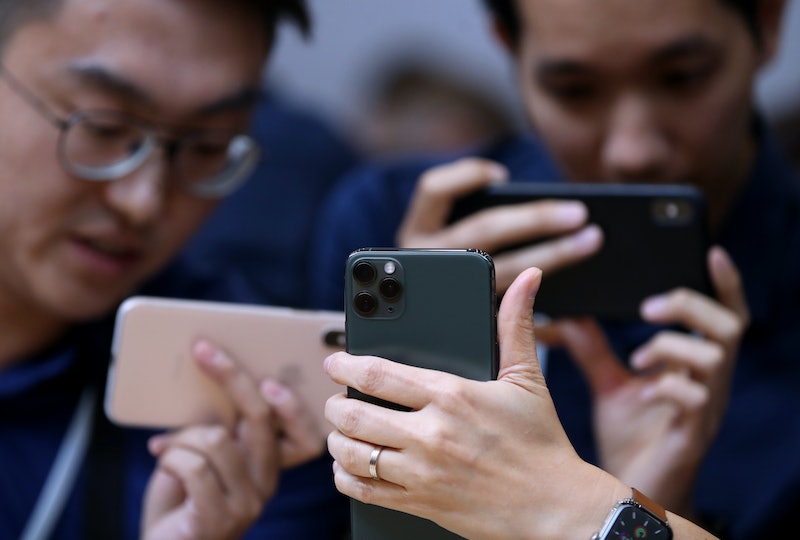 Apple announced its three new iPhone 11 models on Sept. 10 at an Apple event, and they did not disappoint. The new models, which are the iPhone 11, the iPhone 11 Pro, and the iPhone 11 Pro Max, boast a number of new features and capabilities for those looking to upgrade. But if you've been waiting for the day you could buy your totally shatterproof iPhone 11, you might be disappointed.

To be clear, there are improvements to the glass faces of the new iPhone 11 models, and at the Apple event, they were described as the strongest ones yet for an iPhone. The glass in question is on both sides of the phone; it was only on one side of the iPhone XR that was released last year. The glass faces were also described as water and dust resistant at the Apple event, but they were at no point called "shatterproof."

Specifically, the outside of the iPhone 11 models features an "anodized" aluminum and glass design which is the toughest glass ever used for a smartphone, according to Apple, and is not used for any other smartphone. The "anodized" part means that the aluminum was coated with a protective layer, according to a definition of the word by Merriam-Webster.

It's hard to say definitively how close to shatter-proof the new iPhone models are. However, you can look at the previous precedent set for iPhone glass durability, given that Apple confirmed these models are the "toughest" yet.

An experiment conducted by Vanessa Hand Orellana for CNET in 2018 explored just how durable the iPhone XS screen is. The iPhone XS is the most recent model, next to the three iPhone 11 models. For the experiment, Orellana conducted four "drop tests," all over a cement sidewalk.

The iPhone 11 models are even tougher than the iPhone XS, as Apple noted on Tuesday. So if you're the type of person who's willing to take a little bit of a risk, then you might just be totally fine dropping your new iPhone 11 model on the sidewalk again and again. Or if you're the kind of person who hates having to speak through a phone with a screen that's cracked like a spider web, then you'll probably want to get a case for your iPhone 11 to be safe.

The new iPhone models start at $699, $999, and $1099 for the iPhone 11, the iPhone 11 Pro, and the iPhone 11 Pro Max, respectively; there are different memory options for each model, which affect the price. If you're unsure of which model you want, then you can check the differences between the three new iPhone 11 models — just make sure you get a case for your new phone, too.