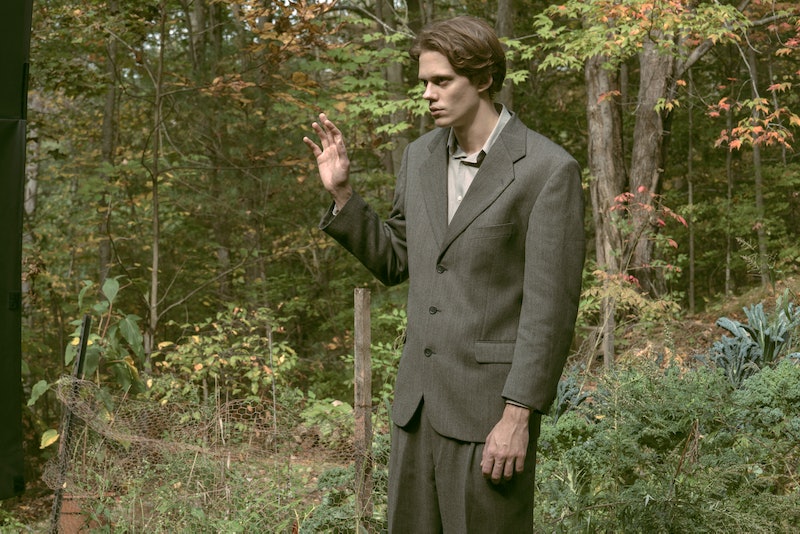 The first season of Castle Rock is almost over, and fans are no closer to learning the identity of Bill Skarsgård's mysterious and dangerous character than they were before. Maybe fans should just take the show at its word, instead of looking for clues. Is the Kid on Castle Rock literally the Devil? Satan himself? His identity could honestly could be as simple as that. Spoilers through Episode 5.

"Are you the Devil," Pangborn asks in Episode 5, confronting the Kid point-blank with words and a gun in the woods. The Kid says "No," but let's look at the evidence — and not just the fact that the Kid seems to influence people around him to do horrible things to themselves and others, or that Skargård's character has not aged in 27 years. He has no memories, and nobody in town seems able to claim him as their own kin. Tragedy follows his every solemn step. The odds are stacked against him, unfortunately.

Plus, the credits open with a page of Stephen King's Needful Things that has the word "DEVIL" circled by some omnipotent note-taker's pen. In that novel, Alan Pangborn himself goes up against a demon named Leland Gaunt, who was basically if not definitely the devil.

Warden Dale Lacy clearly believed that he himself had captured the Devil — an answer from God to his prayers that he would find a purpose and help the tragedy-ridden town.

"He told me he had finally figured out what was wrong with Castle Rock," Alan Pangborn says about Lacy in Episode 2. "He said he had always thought the Devil was a metaphor but now he knew the Devil was a boy and old Dale said he caught him. Had locked the Devil in a box. From here on out, it was blue skies and butterflies." According to Lacy, God instructed him to capture the Devil. He even told him how to make the cage.

Also, as Buzzfeed pointed out, an Easter egg in Episode 4 hints that the Kid is the Devil. An episode of The Twilight Zone is playing in the background at Pangborn's home, which is called "The Howling Man." In that episode, the Devil himself is imprisoned by monks and convinces an unsuspecting visitor to let him go free.

That said, remember when the white supremacist prisoner temporarily sharing a cell with the Kid tried to mess with him, and the Kid said, "You don't want to touch me" in almost a whisper? It sounded more like a warning than a threat. Later, that prisoner developed cancer and died, quickly. With that in mind, maybe these deeds are outside of the Kid's control. There's still the possibility that he was possessed by a nefarious force, rather than evil incarnate. He also offers to help Ruth Deaver and possibly cure her Alzheimer's Disease. At the very least, the Kid is a sympathetic Devil.

"You have no idea what's happening here," the Kid asks Pangborn during the aforementioned confrontation in Episode 5, "do you?" Considering Pangborn had just asked if he was the Devil, maybe he's... not?

Keep watching closely as the action unfolds. While the Kid being the Devil isn't the flashiest or most Stephen King mythology-filled direction for Castle Rock to take, religious themes have always played a part in King's work, and it will be fascinating to see how this mysterious story unfolds.