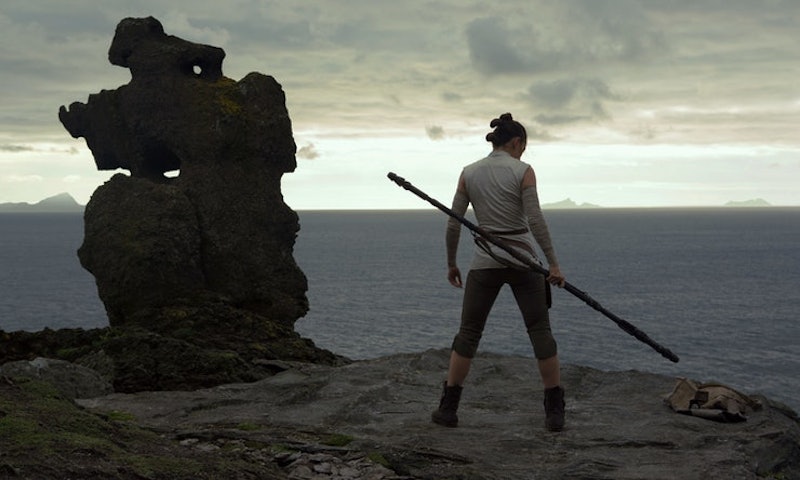 This year's Golden Globes were a sweet surprise for genre fans used to seeing their favorites snubbed during awards season, as shown by examples like Guillermo Del Toro walking away with Best Director for The Shape Of Water, an FX, monster-focused film, over the usual darlings like Christopher Nolan. But fans complained that, once again, cultural phenomenon and box-office juggernaut Star Wars couldn't even snag a nomination. Don't blame the judges for that one though - it turns out The Last Jedi couldn't be nominated. A rookie error cost them some serious critical credibility, but don't worry — it's looking likely that The Last Jedi is eligible for Oscar nominations.

Well, that's only if the filmmakers are careful to avoid making the same mistake twice. For some background, think about how we're used to seeing the glossy side of awards shows — red carpet looks and teary-eyed speeches. But in actuality, the ceremony is the last step in a long process that begins the moment a movie is ready to hit theaters. Each awards show has its own rules and regulations, and they get pretty technical. The Academy Awards has 26 individual rules, each with several sub- and sub-sub-rules, that specify how a film is to be submitted for consideration, what qualifies it for consideration, specifics on how and when it plays in theaters, and elements for disqualification.

For instance, Rule Two, Section 2, notes that all eligible motion pictures must be:

a. feature length (defined as over 40 minutes),

b. publicly exhibited by means of 35mm or 70mm film, or in a 24- or 48-frame progressive scanDigital Cinema format with a minimum projector resolution of 2048 by 1080 pixels...(followed by a paragraph of additional technical requirements)

d. for a qualifying run of at least seven consecutive days, during which period screenings must occur at least three times daily, with at least one screening beginning between 6 p.m. and 10 p.m. daily,

e. advertised and exploited during their Los Angeles County qualifying run in a manner normal and customary to theatrical feature distribution practices, and

That's just one section of one rule, and it's not even getting into the elements that would bump a film from even being considered. So what happened with The Last Jedi, and why the Golden Globes snub? Well, it was a victim of its own marketing and secrecy. The newest Star Wars films have kept details notoriously under wraps, revealing almost nothing about their plots until the their theatrical premieres. That means the studio controlling set visits, keeping scripts from making their way online, and not letting anyone see the film until LucasFilm is good and ready to let it be seen in December, timed to hit the holiday season full blast. And that was their fatal mistake for the Globes.

In a lot of awards speeches, you'll hear people thank "The Academy" or "The Hollywood Foreign Press Association". These are the groups responsible for voting on the films for the Oscars and Golden Globes, respectively. One of the clauses in both awards' rulebooks note that films not only have to have a specific sort of theatrical release, but that they must be screened for the group by a specific date so they can, you know, judge them. Makes sense; you can't judge a film you haven't seen.

The 2017 Golden Globes screening cutoff date was Dec. 4. The Last Jedi's premiere date? Dec. 14. That's right — the Golden Globes didn't snub Star Wars, Star Wars snubbed the Golden Globes. It's a bold move, but Disney and LucasFilm probably thought The Last Jedi had enough Force to succeed on its own without the boost that comes with award prestige. But would they intentionally pass on a chance at an Oscar nod?

The 2017 rules note that the cutoff date for submission is Dec. 1. But if a film screens in Los Angeles after Dec. 1, the deadline for submission is 5:00pm PT, on Friday, Dec. 15. So even though The Last Jedi waited until the last minute, it's in for the Oscars. And though fans feel the Academy passes over big-budget entertainment for more serious-minded fare, Star Wars has actually won seven Academy Awards, including Best Editing, Best Costume Design, Best Original Score, and a Special Achievement Award for Special Effects.

With not just fans, but critics across the board lauding The Last Jedi for its plot, performances, and just being an enjoyable movie, this might be the year a Star Wars film finally gets a nod for Best Picture. In an awards world that prides itself on highbrow fare, it's still a long shot, but there's always A New Hope.