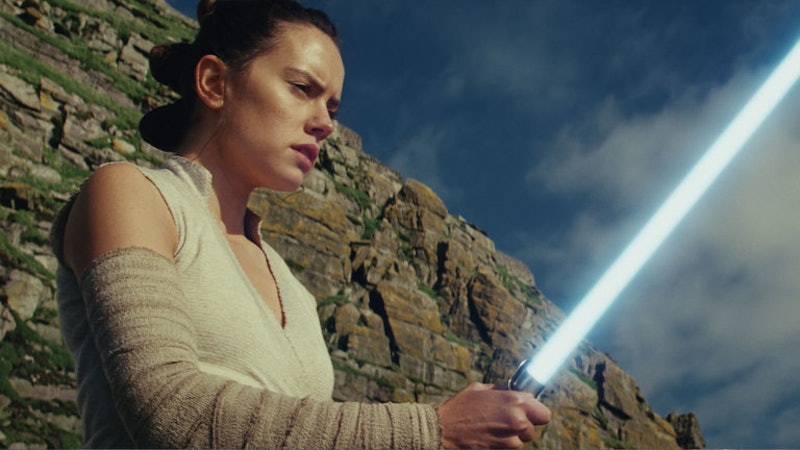 Fear not, this review does not contain spoilers for The Last Jedi. While there are some folks out there who seem to feel threatened by the number of women leading major Star Wars films (sorry, sexist jerks, these women are here to stay), for the most part, the fandom seems to be nothing but thrilled with women like General Leia, Rey, and Jyn Erso taking top billing in the franchise. And that thrill will continue once audiences get a look at Star Wars' latest offering, Dec. 15's The Last Jedi, in which women are treated not just as equals, but as leaders, adventurers, and even saviors. No caveats. No sexualization. Nothing but pure power, cunning, and might.

And this is huge, because for many female fans, the existence and rank of female heroes is no longer enough. We've seen proof of what we always knew — that female heroes are just as profitable as male ones (hello, Hunger Games trilogy and The Force Awakens) — and now we demand something more than just a woman at the center of the poster or in the final, gut-wrenching shot in a trailer. We want a woman who truly feels like a hero — with no caveats or concessions made due to her gender. Pretty simple ask, right?

Well, as it turns out, not so simple. Even when we've seen some of our favorite heroines get high billing, like Scarlett Johansson's Black Widow in the Marvel movies, and especially Gal Gadot's Wonder Woman in November's Justice League (in which disgusting up-skirt shots are apparently considered acceptable), most franchises still feel the need to justify their female heroes' presence by sexualizing them, and by choosing actors that meet tired, utterly unfair, "conventional" standards of beauty. Our female heroes are often subjected to doubt or derision from other characters based on their gender, with male characters often expressing disbelief or shock when a woman takes up a leadership mantle or manages to best one of her foes (this even happens in 2017's very empowering Wonder Woman, unfortunately).

But for the new Star Wars trilogy, and especially in The Last Jedi, that doubt, that derision, that belittling sexualization is nowhere to be found. No one doubts Rey's abilities or marvels that she can somehow be powerful even though she's "just a girl." Every single character in this film immediately recognizes and respects the strength and innate ability that she's tapped into since discovering her abilities in The Force Awakens. No one questions General Leia's credentials or decisions, or worries that she's being too emotional. And even when one male character questions the authority of one of the (numerous) female leaders in the film, it's made clear that his squabble is based purely on strategy, not anything as trivial as gender. Hell, there's even a badass Resistance squadron leader who drives her team of fighter pilots into battle without a peep or bit of pushback from her male direct reports — which shouldn't feel remarkable, and yet, it does when held up against our persistent reality in 2017.

The female actors in this film also offer a spectrum of representation, from Kelly Marie Tran (Rose Tico) becoming the first Asian woman to star in Star Wars ever, to Lupita Nyong'o voicing Maz Kanata, to Laura Dern defying Hollywood's notorious ageism by appearing as the regal (and oh-so capable) Admiral Holdo. Even Rey is praised purely for her strength, not her speed or ability or cunning — something we rarely see for female heroes outside of Patty Jenkins' fantastically empowering Wonder Woman.

Add to all this the fact that, while the new Star Wars films are certainly not devoid of sexual tension (seriously, ask the fans building 'ships on reddit and Tumblr right now about how many characters they're hoping to see smooch in The Last Jedi), there's not a single frame of this film, a single costume, or even a single line, that reduces any of the powerful women — Leia, Captain Phasma, Admiral Holdo, Rose Tico, Maz Kanata, or Rey — to their gender. Not a single moment that puts anyone in danger of becoming a sexual object. These women are generals, rebels, and leaders and they are treated as such: with heart, with compassion, but most importantly, with respect. And when there is affection (in any form) bestowed upon women in The Last Jedi, it's given based on who the characters are — never what they look like, or simply because they are women.

In essence, the world created by The Last Jedi is one wherein women are treated as we've always wanted to be treated. This galaxy is a utopia far, far away from a realm where sexual harassment, while finally under a microscope in media and entertainment, is still so prevalent that some women have become desensitized to it, and accepted it as just another daily issue we all deal with. A place where actual world leaders have openly questioned a professional woman's abilities based on her gender; where women still hold fewer leadership roles (only 6.4 percent of the top 500 U.S. companies are led by women, and women still comprise less than 20 percent of the representatives in Congress); and where equal pay isn't projected to be even a possibility until 2059.

And when we're dealing in fictional worlds, as we are when creating superhero squadrons, sci-fi epics, and fantasy sagas, these realms can be to the liking of the storytellers behind them. They have the potential to be the world we want, rather the pitfall-ridden world we've learned to accept. And while The Last Jedi is a fantastic example of how films can offer this much-needed world to women everywhere, it's not as if Lucasfilm and director Rian Johnson just pulled off some impossible, miraculous feat. Far from it.

The film comes from a company that is quite literally run by women. Yes, parent company Disney is still a male-dominated landscape, but over at Lucasfilm, the company started by George Lucas and sold to Disney, the leadership team is largely female. Lucas' right-hand woman since the '70s, Kathleen Kennedy, runs the entire company. And when it comes to what stories make it into the Star Wars canon, head of development and the Lucasfilm Story Group, Kiri Hart, is the one calling the shots. She's also filled out her team with a diverse array of contributors, including (you guessed it), more women. When women contribute to the creation of the fantasy worlds we immerse ourselves in, shocker, those worlds start to feel startlingly equal.

It's no secret that pop culture consistently affects perception of and understanding of various elements of our actual culture, from violence, to the court system, to even general intelligence levels. So when the fantasy worlds we all wish we could live in start to show startlingly equal gender dynamics, doesn't it stand to reason that they could set an example for the kind of future our real world might one day achieve?

Better representation for women is just that easy, folks. It's almost mind-numbingly easy. Give women a seat at the damn table. That's it. And maybe then, this world we all want doesn't have feel so far, far away.